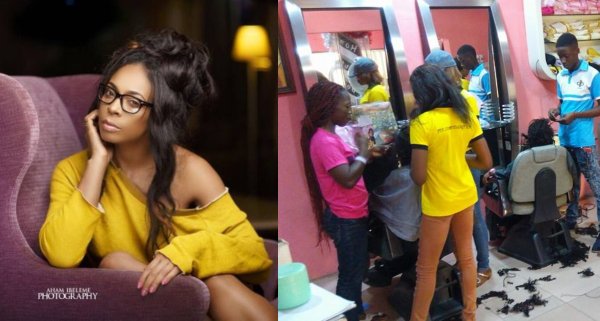 According to TBoss, it is rude and disrespectful for Nigerian hair stylists to touch her hair without washing their hands first. Her post reads; 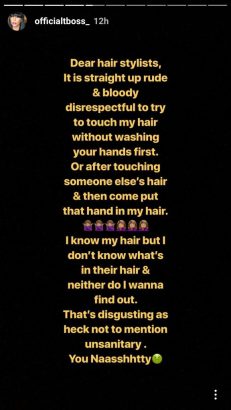 Recall that TBoss who was the unofficial sanitary prefect during the last edition of the Big Brother Naija Reality Show, slammed some of the ‘double wahala ‘ edition housemates for being dirty.

The second runner up who was known for ‘cleanliness during her time on the reality show in 2017, took to her Instagram to express her irritations towards the present housemates. Tboss after watching female housemate, Princess rub ice-cream on her fellow housemates’ lips and body, with the same spoon wrote:

”Big brother please stop that one that is putting ice cream on everyone’s lips and nipples with the same spoon.

” OMG now she is sitting on the bare floor with her butt half exposed, yukk, talk about unsanitary.

”Now she is putting Tobi’s sweat on another’s lip and had someone else lick it up, am I the only one seeing this?

”My Gawwd, this one is talking bloody non stop, how can someone talk so much?”

She also fired back at her critics, after her comment generated controversy. TBoss called out those who can’t walk up to her on a normal day, sitting in their homes and using their N100 data to insult her for making a ‘clear’ observation. According to her, anybody who has a ‘bloody brain and bloody eyes’, will see what was happening in the house on Saturday Night.

The second runner up of the reality TV show in 2017, also stated that she doesn’t care about what people say about her, assuring that she will continue to remain herself despite the criticism.

Johnson Olumide - February 17, 2020 0
The Last Few days, especially since Wednesday when Twitter War Broke among Two Us Rapper and Also Pulling In A Stripper They Both Once...

Violette - November 13, 2019 0
Popular America singer and rapper is really taking his new found religion seriously as he's set to take his Sunday Service to the church...

Ifeoma Ngozichukwu - October 9, 2021 0
The delectable TV host, Toke Makinwa is set to anchor this year's Guilder Ultimate search. The TV reality show which has been brought back due...

Violette - November 16, 2019 0
Veteran Nigerian singer 2 Face Idibia has slammed Blackface for his continous threat of suing him on air and via social media. 2 Face Idibia...

Violette - November 10, 2019 0
Fast rising Nigerian rapper, singer and songwriter, Zlatan Ibile has taken to his his Twitter account to respond to speed darlington accusations of not...