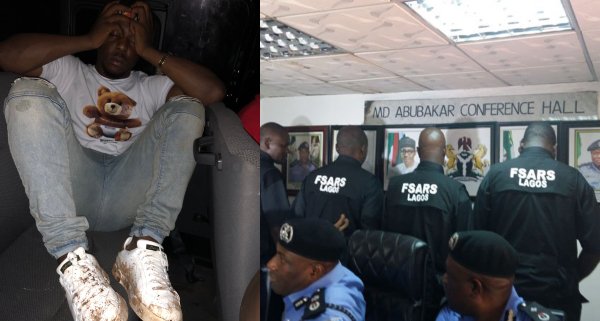 Nigerian rapper, Zoro who turned up for an event in Port-Harcourt narrowly escaped getting killed Rivers State SARS operatives.

According to Zoro who described the incident as the most terrible day of his life, said the Rivers State SARS operatives shot at them continuously even when they alighted from the vehicle. He identified the officers as Mr Wachukwu and Mr. Mike.

Sars in port harcourt. These bullets almost caught me, for nothing

You double cross us , flash torch, we stop , you begin shoot ? We come down you still Dey shoot? Mr Mike and wachukwu weldone..They just give them uniform. Just had the most terrible day of my lifeee Gooooooddd. A very hearty and sincere apologies to thebeat999ph and my people that came out for me at the beatfm port harcourt pool party yesterday, boss @spaceboogie26 I’m so sorry

The force spokesman, Acting Deputy Commissioner of Police (DCP) Jimoh Moshood, said in a statement in Abuja that Mr Idris gave the order at a meeting with critical stakeholders. He said that the meeting was convened to brief the stakeholders, on the progress made so far in the overhaul of the SARS now known as Federal SARS.

The police boss said that the overhaul of SARS was beyond rhetoric as strategic reforms were being implemented. He said that the FSARS operatives had been ordered to desist from attending to civil or commercial matters henceforth and focus strictly on armed robbery and kidnapping cases only.

This is coming after the Inspector-General of Police, Ibrahim Idris, ordered members of the Special Anti-Robbery Squad (SARS) to wear police uniforms with full identification, pending the launch of new FSARS uniform.

According to Mr Moshood, the Commissioner of Police in charge of FSARS, Habiru Gwandu, informed the meeting that a human rights desk had been created in the 36 states of the federation and FCT.