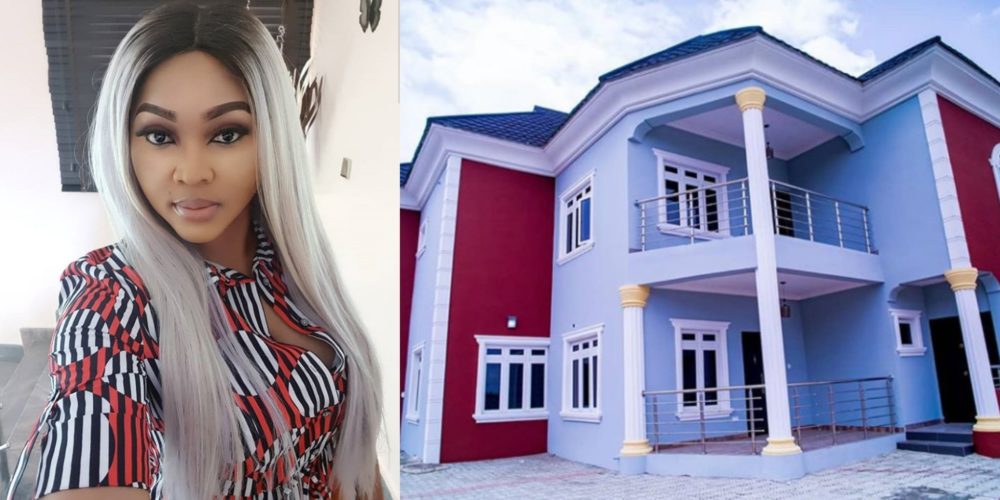 This is an expose as written by popular blogger, Stella Dimoko Korkus – read on:

Quote
What you are about to read can only be from a Nollywood movie script,so please if you do not understand any part,call a Nollywood movie producer near you to explain…..
Lord have Mercy on you if you jump into conclusion!!!OPEN MOVIE SCRIPT….This movie scene opens with the actress celebrating a new house and thanking God for blessing her…..As she celebrates,the scene takes us back to the time when she was under her former hubby and all the abuse she suffered and the public disgrace…..

The flash back takes us to a point that explains how she may have gotten the money to buy the house and send someone to another land to experience life and school.

We are introduced to a flash back scene where her friend and colleague Ms Amala seller introduced her to a serving governor,in the movie script,she was very humble and Uncle Dapo liked everything about her and took her on to the shock of the introducer who thought it would be a one night stand.
The relationship soon progressed to trips abroad where both sometimes met to Jolly Jolly and on one occasion Uncle Dapo almost passed out from taking that drug and too much gbenshing…..lol

The shopping?camera follows her shopping around back to back,spending forex like it was going out of fashion…

Move to another scene where it become evident that seriously love struck Uncle Dapo could no longer share her with anyone,so she goes back home and plans her exit and bingo,she moved,leaving behind ish…

Move to another scene where both the introducer and introducee are no longer as close as they used to be cause introducer didn’t know it would be this strong or that introducee would gain so much from the supposed runs she introduced introducee to….Introducer decides to face her Amala business whilst going on with her day job……

Another scene sees the former husband raking on the social media concerning his runaway wife as it has dawned on him that she is gone for good.
He shakes his head in regret and watches as his followers complain of his gbagauns..In his mind he was like ”what is gbagaun compared to losing such a beautiful wife”…He hisses!

Another scene shows lover girl thinking of her Uncle Dapo,she imagines her hands rubbing his hairless head and she smiles to herself..she would romance him into buying her her dream house in Lagos…..

Movie comes back to the present scene where the actress is posting photos of her house in Lagos,let us say the house is in Oworonshoki…….

The actress smiled cos just the other week,the social media had a report of another popular beautiful lady being named her mans babe but he assured her that he wasn’t the ATM of the other babe,so the actress smiled wondering if another book would be written on this by that person…..

The movie ends with the actress putting on a robe called Jala and going to bed with a smile on her face…Nne BIA the smile was beautiful.

Rumour has it that Uncle Dapo don shit for church and them no give am card again …..

Rumour has it that this movie would sell out at the movies…
Ask a movie maker near you if you do not understand this movie,this is one of my failed attempts at writing a script.

This is not a real life story but in Nollywood stories can be brought to life and make it appear real….

If your try nonsense with me, I’ll deal with you – Bobrisky warns (Video)

Violette - July 29, 2020 0
Controversial cross-dresser Bobrisky has a message for all those hating and shading him on social media as he reveals how he will deal with...

Johnson Olumide - February 18, 2020 0
Linda Ikeji whom is Nigerian's Richest Blogger in Africa living in  a house worth over 640 million Naira on the Inland has rebuffed claims that the Tax...

Johnson Olumide - February 17, 2020 0
Momanger Kris Jenner, 60-year-old posted the Photo below on her social Media page yesterday and also said she underwent hand surgery for reason we don't know yet. The...

Johnson Olumide - December 20, 2019 0
Bobrisky has showed off the expensive cake his best friend, Actress Tonto Dikeh bought for him for his birthday. “@tontolet love  me so much she make...