American singer, Cassie, whose relationship with music executive and rapper, Diddycended days ago, has reacted to their split.

Reacting to their split in a cryptic message via her Insta-Story, Cassie  wrote: ‘F*** these hoes.

We reported that Diddy reportedly dumped his girlfriend of 10 years Cassie Ventura, for a much younger lady and model Jocelyn Chew.An insider who spoke with People, said both went their separate ways months ago.

“The decision was amicable and they remain friends.” 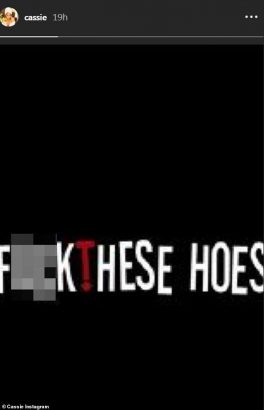 “Cassie is going to focus on her music and acting career,” the source adds.

Diddy who has been linked to Jocelyn Chew, has been spotted with her in Miami, and attending Drake’s recent show in Los Angeles. Combs, 48, and Cassie Ventura, 32, met in the early 2000s after she was signed to his Bad Boy Records label. They were first linked together back in 2007 and have collaborated a few times together, including on his 2008 tune “Swagga Like Puff” and her 2009 song “Must Be Love.”

Talking about her relationship with Diddy in 2013, Cassie said;

“Just being around him is a completely inspiring experience. The key to maintaining any relationship, be it a romantic relationship or a friendship, is honesty and communication.”

Diddy on the other hand, is a father to six kids — sons Quincy Brown, 27, Justin, 24, Christian, 20, twin girls D’Lila Star and Jessie James, and daughter Chance, all 11 — through previous relationships with exes Misa Hylton-Brim, Kimberly Porter and Sarah Chapman. The rapper appeared on The Wendy Williams Show in June — telling Wendy, “I’m in love now.”