The fued between america’s two baddest female rapper Cardi B and Queen Nicki Minaj is officially Over.

You all remember about a month ago during the New York Fashion Week that Cardi B and Nicki got into a Fight that lead to Cardi getting a knock on her forehead and going online to rant about it, which also Nicki Followed suit and used her Queen Radio to Slam the Bronx rapper.

According to Lailasnews, Cardi B has always maintained that Nicki has been jealous of her success in the music industry, while Nicki insisted she has no qualms with the Dominican rapper who seems to be breaking series of records previously held by the Nicki.

Their feud actually got heated late yesterday evening after Nicki, on the latest installment of her Beats 1 show “Queen Radio,” addressed her beef with Cardi B.

READ ALSO
Nicki Minaj Hangs Out With Her Boyfriend,Meek Mill

Discussing their altercation at a Fashion Week party in September, Nicki said that Cardi had been attacked by Rah Ali, a friend of Nicki’s who was also Cardi B’s co-star on “Love and Hip Hop,” rather than hit by security, as had previously been claimed.

Nicki said that Rah Ali punched Cardi B in the head “9 or 10 times.” Nicki also offered a $100,000 for surveillance footage of what happened that night.

This actually angered Cardi, who then went on a series of rants via her Instagram page calling out Nicki and her fans and friends.

But it all looks like the two divas are shielding their swords and looking for a better future ahead. 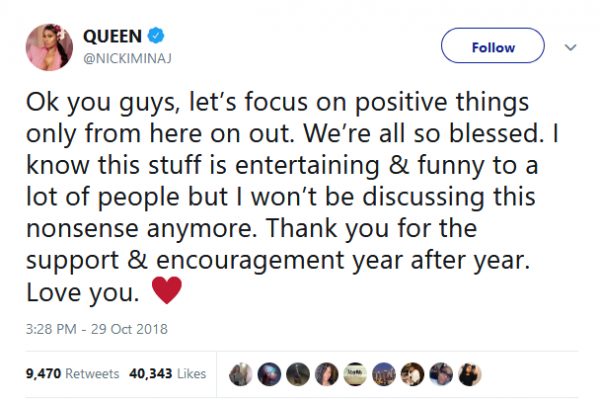 Nicki Minaj then later took to twitter in the early hours of today and posted:

Ok you guys, let’s focus on positive things only from here on out. We’re all so blessed. I know this stuff is entertaining & funny to a lot of people but I won’t be discussing this nonsense anymore. Thank you for the support & encouragement year after year. Love you. 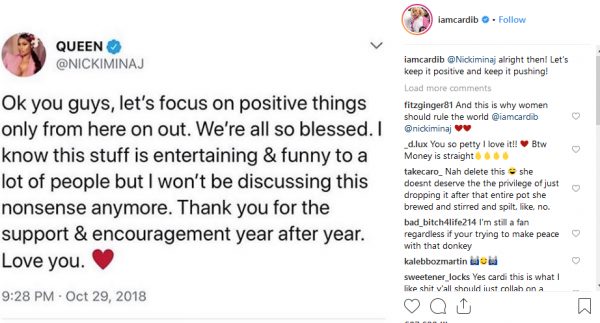 @Nickiminaj alright then! Let’s keep it positive and keep it pushing!

#BBNaija: Meet the Lockdown Bbnaija Housemate Season 5, plus all you need to Know...

Munakur Jantiku - July 20, 2020 0
The much anticipated Big Brother Naija is back again and for the next 10 weeks, we will be updating you on the juciest, funniest,...

Violette - December 29, 2019 0
Nigerian Beauty Queen, Anna Banner has ignited a fresh dating rumour with singer and songwriter, Flavour as she posted a cozy picture of them...