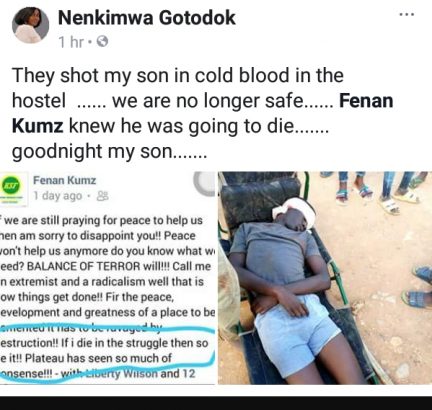 A University of Jos Hostel, was reportedly attacked by ‘Muslims’ who left one student dead, and many others injured. 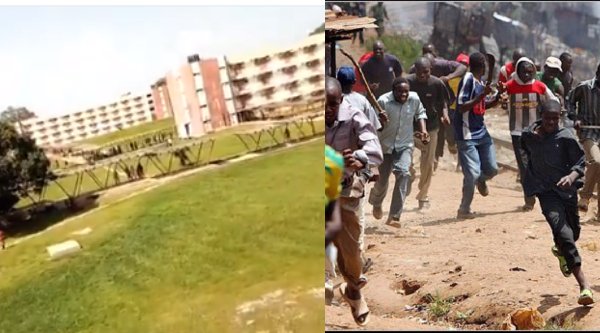 Twitter user @nanlengdati disclosed that when the University of Jos hostel was attacked, there was no security to counter the attack or restore normalcy in the area. Read her tweet below;

The university of jos hostel under attack, a federal university with no security what so ever. @segalink,@NigerianPolice, HELP!

The school got attacked this evening by said ‘muslims’, leaving at least one student dead and some injured. May his soul rest in peace

FLASH: A 300-Level student, Kums Shedrach, has been shot dead by unknown gunmen at the University of Jos student Village hostel as well as many others in a fresh wave of violence that engulfed the state Capital on Sunday afternoon and evening.

The University of Jos student who was shot dead, has however been identified as Shedrack Kums a 300 level Law student. His mother who shared a screenshot of his last Facebook post wrote;

This is coming few days after it was reported that 14 people, were reportedly on Thursday night along Rukubu Road in Jos, Plateau StateCapital by unknown gunmen.

The gunmen who invaded the Rukubu Road community linking the Rukuba Barracks at about 8 pm, local time, shooting at random, left 14 people, including a family of 9 dead in the incident that has long caused pandemonium in the area.

However This day reported that the assailants reportedly attacked the home of a famous woman in the area called Mama-Kogi at about 9 pm on Thursday, killing her and members of her family including Blessing, Ruth, Jonathan, Cynthia and Majesty. Others in the neighbourhood were also killed in the attack.

It was gathered that the incident left people running away from Terminus Market to their house for safety, as the community has been enveloped by grief and anger. The incident reportedly degenerated into violence in the area, and escalated to Gada-biu, where two other persons were killed, and Akpata, where another person was also killed, and indeed other parts of the city.