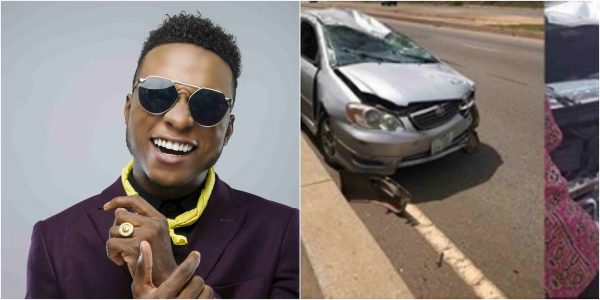 Nigerian Disk Jockey DJ Kaywise and a friend DJ Spaxx survived a ghastly motor accident in Abuja, yesterday after a successful event in the nation’s capital.

DJ Kaywise and DJ Spaxx were both on their way to the airport when the accident occurred, leaving Spaxx and the driver injured. Kaywise, however, came out unhurt.

Brief information DJ Kaywise as gathered from his website Djkaywise.com.

He is without doubt, one of the hottest DJs in the genre of street hop.

Dj Kaywise is very much an innovator and barrier breaker. This Lagos Born has been

his brand. Till date, DJ Kaywise has accumulated over 3000 mix tapes, which has

circulated across different parts of Nigeria and Africa. His most popular mix tape was

honing and developing his craft as a performing deejay. He has performed on several

stages across Nigeria, alongside other greats such as DJ Jimmy Jatt, DJ Xclusive, DJ

Spinall and DJ Neptune to mention a few. He has worked with MTV Base, Nigezie,

Following the footsteps of some of his role models David Guetta and DJ Jimmy Jatt,

DJ Kaywise released a single in 2013, titled ‘Loyalist’ featuring Iyanya. He followed this

up in 2014 with ‘Feel Alright’, a collaboration with Iceprince, Patoranking & Mugeez,

then most recently ‘Warn Dem’ with Oritsefemi.

In January 2016, he launched the maiden edition of his annual concert, the JOOR

CONCERT. A concert designed to celebrate the essence of youths in the town he grew