Kim Kardashian has reacted after her former lover ,Ray J dished some interesting details about their time as lovers. 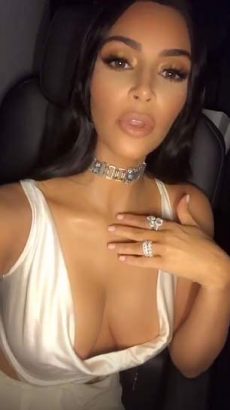 Ray J claimed Kim would stop during sex to touch up her makeup .He also alleged she spent $100,000 yearly on Lingerie and would stop to take her mum’s calls while they were in bed.

While reacting on Twitter,Kim called him a pathological lair ..

He is a pathological lair.You actually believe this story? It’s too funny to me.

According to The Sun, he said at a party

Kim and I had fun times – marathon session,’ he began while speaking to fans during the ‘boozy’ and ‘wild 12-hour party session’, She liked to look dope during sex, the right lighting, setting the mood. She was wild – there was a red Louis Vuitton trunk of sex toys.’ But she didn’t like getting sweaty and would stop to do her makeup if she did.’ He also added she would only drink $300 Cristal champagne that was perfectly cooled to 22 degrees.
. Ray J also revealed that if mom Kris Jenner called during sex, ‘she would nearly always take it’.

During Ray J’s night out, he also reportedly referenced his ex’s current marriage to Kanye West, reciting: ‘I hit it first, man!’ before confirming he had no regrets on his time with Kim.