Nicki Minaj slammed shoe designer, Steve Madden on Tuesday, after he denied the female rapper’s claims on having once offered her an endorsement deal in the midst of her feud with rival Cardi B.

Following Nicki’s explosive rant on her Queen Radio show on Monday, the Bodak Yellow hitmaker embarked on a lengthy rant over social media for hours.Cardi claimed most deals Nicki has were turned down by her. 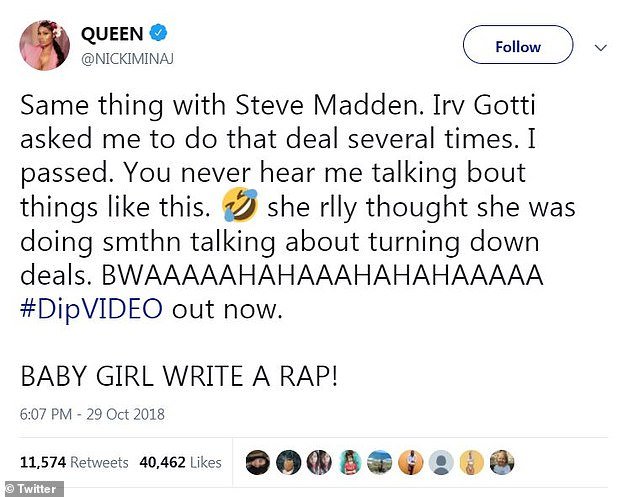 Nicki then went on to reveal she turned down a deal with Steve Madden which was given to Cardi.

‘Same thing with Steve Madden. Irv Gotti asked me to do that deal several times,’ the Trinidadian shared with her followers on Twitter.’I passed. You never hear me talking bout things like this. she rlly thought she was doing smthn talking about turning down deals.’

However, a journalist ,Jennifer Platon revealed he was lying after sharing an excerpt from his 2015 interview .He said

‘I was gonna do a collaboration with Nicki Minaj and we got into a fight the first minute we met,’ he said in the 2015 interview, according to Platon.

‘And then we patched it up. We were cool. We text each other, we became sort of buddies. We were thinking of doing something, and I would’ve, but I was with Iggy and I thought, ‘Coke and Pepsi.’

It was a mistake. I made a mistake and I wish that I could go back in time and work with Nicki instead of Iggy.’

Adedokun Moses - September 14, 2020 0
Former housemate at the ongoing Big Brother Naija 'Lockdown' show, Lucy have apologized to fans and followers of the show over her opinion on...

Serena Williams Flaunts her Sexy Body in Black Bikini as she Relaxes by the...

Johnson Olumide - July 8, 2019 0
She is 36-year-old, America's Most Successful Athlete, she has a record 22 Grand Slam Championship tied on with Steff Graf of Germany, she is...

People should stop asking me for money, am saving for my Birthday – Tonto...

Johnson Olumide - May 20, 2019 0
Nigeria most controversial rave of the moment actress, Tonto Dikeh took to her Instagram page moments ago to give a stern warning to all...