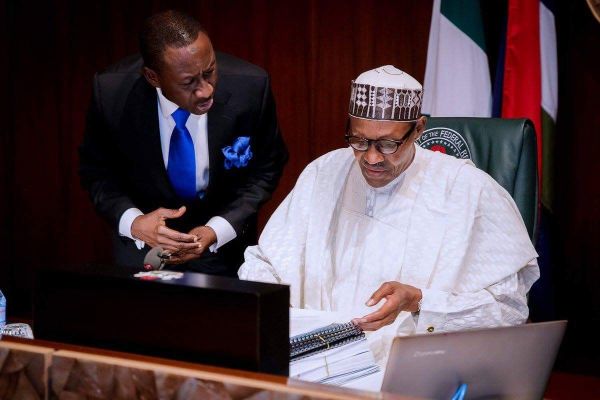 Barely 24 hours after news reports had it that the Nigerian President , Buhari had endorsed the Minimum wage of N30,000 presented by the Tripartite Committee.

According to a report by Vanguardngr, the Presidency frowned at the misinterpretation of Buhari’s remarks when he received the report of the Tripartite Committee on the Review of National Minimum Wage from the committee’s chairman, Ama Pepple, on Tuesday.

It was said that a presidential source, who preferred not to be named, said the president did not endorse N30,000 as proposed by committee as being reported by some sections of the media. He said;

“But the president’s speech at the event was immediately made available to the media and nowhere indicated that the president endorsed N30,000 Minimum wage.

“It is not the duty of the president only to endorse a new national minimum wage. The process involves the Federal Executive Council (FEC), the National Economic Council (NEC) and the National Assembly.

“It is imperative for us to always avoid misinterpreting a written speech,’’

At the submission of the report of the Tripartite Committee that negotiated a new minimum wage with labour and other stakeholders, President Buhari pledged that the Federal Government would soon transmit an Executive bill (on National Minimum Wage) to the National Assembly for its passage within the shortest possible time. He said:

“Our plan is to transmit the Executive bill to the National Assembly for its passage within the shortest possible time.

“I am fully committed to having a new National Minimum Wage Act in the very near future.’’

Violette - July 17, 2020 0
The Popular Nollywood actress who is famous for a glamorous wedding, Adesua Etomi has sent a lovely to her colleague Linda Ejiofor. Remember how Linda...

Violette - January 22, 2021 0
Talented rapper and singer Dremo has revealed how he quit smoking eight months ago as he noted that it's not meant for everyone. Smokers are liable...

Violette - November 1, 2020 0
Veteran Nollywood actress, Laide Bakare have arrived safely at United States of America as she tends to participate at the upcoming presidential election coming...

‘I do not do married Men’ – BBN Ifu Ennada, set to release names...

Johnson Olumide - March 5, 2021 0
Former Reality Star, Ifu Ennada has revealed that she would be releasing names of married men in her DMs. According to her, she has been...