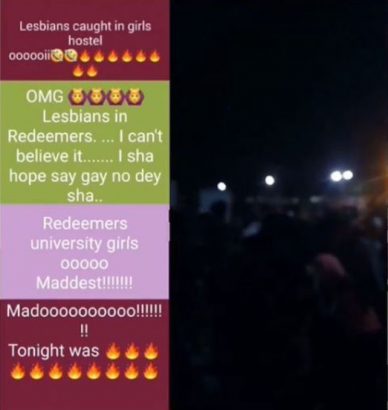 There was a brief pandemonium at Redeemers University last night, as 2 lesbians were reportedly caught by their colleagues.

It was gathered that the two lesbians were caught in the school’s hostel, and some students of the institution have already updated their Whatsapp status with the incident. Here is a video of the incident below;

Recall that few months ago, Kogi State University was in the news after lesbian sex videos involving students of the university surfaced online. Some of the students involved are those of Economics and English Education departments.

It was gathered that one of the students, considered leaving the school to avoid possible stigmatization after the videos went viral.