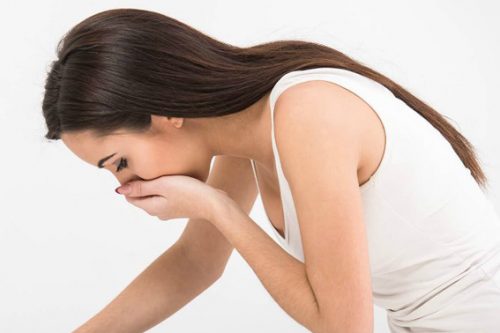 How To Stop Vomiting?

Nobody likes vomiting. It’s an unpleasant act where we throw up the contents of our stomach, and it precedes a feeling of discomfort and nausea that actually makes the act of vomiting a relief in some ways.

So, how to stop vomiting? Vomiting itself isn’t a problem if it’s just a one-off thing and we know what caused it. But when we start to vomit and can’t seem to stop, it can be a cause for panic and alarm.

In this article, Beauty and Tips takes a look at what causes vomiting and how to stop it via 20 effective home remedies.

Vomiting isn’t all that unusual. People vomit – it’s just a fact of life that we will all vomit at some point.

Most of the time, we know exactly why we’re vomiting. For example, people vomit after drinking too much alcohol, eating the wrong foods or because they’re sick, perhaps with a stomach bug.

Vomiting itself isn’t the condition – rather, it’s the symptom of another condition. Motion sickness can also cause a person to vomit, as can a major headache or a bout of chemotherapy.

Pregnancy can cause some women to vomit, as can certain prescription drugs.

As we said, most of the time the cause is known and there is no reason to be alarmed. However, there also instances when a person should seek medical help immediately. For example, if you find blood in your vomit (especially large amounts), you need to call the emergency room straight away because blood in the vomit is a medical emergency.

What might cause blood in one’s vomit? Most often, a person who vomits blood has ruptured a blood vessel. This can happen if you vomit or cough too forcefully. If this is the case and you vomit just a small amount of blood, there’s no need to go to the emergency room. However, if you are vomiting a large amount of blood, it’s important to call a doctor straight away.

Other reasons a person might vomit blood include an ulcer, stomach bleeding or cancer. If you vomit blood and feel otherwise dizzy, you should seek medical attention.

Can Vomiting Cause Complications?

It can, although these complications are rarely life threatening.

The most common complication of excess vomiting is dehydration. When a person vomits a lot, they naturally lose a lot of fluids. To combat this, you need to stay properly dehydrated by drinking lots of water.

Other complications include dry mouth, darker urine than normal, headache, tiredness and confusion.

The most serious complication of vomiting is malnutrition. If you can’t keep solid foods down, your body starts to lose nutrients, and this can be problematic. If you feel very tired, weak and confused, and if you haven’t eaten properly for a few days, it can be a sign that you are malnourished. In the event, you need to seek immediate medical attention.

In the even that you’ve started vomiting and want it to stop soon, let’s take a look at some home remedies and tips and tricks you can implement.

20 Home Remedies and Tips On How To Stop Vomiting

For this home remedy, you need to take one to two drops of peppermint essential oil and pour them onto a tissue. Then, inhale. Breathe it in for a good few minutes and do this each time you begin to feel as though you might want to vomit soon.

Peppermint essential oil has anti-emetic properties. This means that its smell can minimise feelings of nausea and prevent you from vomiting.

Sugar and salt are otherwise bad for you, but it’s okay to drink them both as you bid to stop vomiting.

Drink a good mixture of these to restore the balance of salt levels in your body.

This is another good tip on how to stop vomiting. Each time something isn’t right with your gut, you should turn to ginger.

Asian cultures have been remedying ailments with ginger for years and years. It’s especially potent for treating digesting problems because it’s a natural anti-emetic.

To ease your symptoms with ginger ale, simply take a few sips now and then. Don’t drink it chilled or cold but let it warm to room temperature. Keep sipping on it during the day and you should find that your symptoms begin to disappear.

Remember when your grandma tried to convince you that baking soda can cure literally everything? Well, it turns out that she was kinda right. It probably can’t cure everything but there isn’t a lot it can’t help with.

It can certainly help when it comes to stopping you from vomiting. All you need to do is take a quarter teaspoon of baking soda and add it to half a glass of water. Then, rinse your mouth with it.

Do this after vomiting to eliminate that nasty “vomit taste” from your mouth. It works because baking soda can neutralise the acids that vomiting produces.

Baking soda can also prevent your teeth from getting damaged by excess vomiting.

Like baking soda, is there anything that lemons can’t help with? Probably not.

So how to stop vomiting? All you need for this one is a teaspoon of lemon juice and a teaspoon of honey. Mix the two together and – slowly – drink.

This remedy should calm your nausea down, and thus stop you from vomiting.

Each time you begin to feel sick, drink this remedy. Lemons are very powerful because they contain lots of key antioxidants that help to clean your stomach. Moreover, lemons also contain vitamin C that strengthen your immune system.

Instead of lemon and honey water, how about some old-fashioned lemonade? We love it and we bet you do, too. And it works like heck for eliminating vomiting.

Cinnamon tastes sweet, and it can help to treat your queasiness.

Here is a good tip on how to stop vomiting. All you need for this home remedy is a piece of cinnamon, honey and some water.

Boil a cup of water and steep your cinnamon stick for around ten minutes.

Then, remove the stick and sweeten the water (which is now tea) with honey.

Sip slowly (once it’s cooled down).

We recommend that you drink cinnamon tea like this at least three times a day while you’re feeling sick. It works because cinnamon has always worked for treating vomiting. It’s a well-known cure that people have been using for years and years. it contains stimulating and anti-emetic properties.

Take one and a half tbsp of cumin powder and add to a glass of water. Stir and drink.

This is an effective remedy and it won’t be long before you start to feel a lot better.

Admittedly, onion juice doesn’t sound amazing – but it kinda is! It won’t leave a great smell on your breath but it WILL eliminate the feeling that you want to vomit. And that’s the most important thing here, right?!

To get that juice from the onion, you just need to squeeze it tight until it drains out (this might feel a tad disgusting but just keep going!).

Then, mix it with the honey before ingesting.

We recommend that you don’t stop there, but that you follow it with some peppermint tea. This is a good idea because the peppermint tea will help to get rid of the taste of onion from your mouth, and it also works with the onion juice to soothe your stomach.

We suggest that you do this twice a day while you’re sick. It works because onion is really good at quelling nausea and has been used to prevent vomiting for years and years.

Really don’t fancy onion juice? No worries. How about orange juice instead? A lot better, right?!

Orange juice can prevent vomiting because it restores vital nutrients, vitamins and minerals that have otherwise been lost due to all that vomiting.

It can also raise your blood pressure levels back to their normal range, too.

Here is another great tip on how to stop vomiting. Take two or three garlic cloves and chew on them for almost instant relief from all that vomiting.

Like onions, milk is a bit of acquired taste and we know that not everyone likes it. But if you do happen to like milk, you can use it as an effective home remedy for preventing nausea and vomiting.

We know, we know! But hear us out.

Warm your milk (don’t boil it!) and then make your toast.

Then, dip the toast in the milk and … eat!

If this sounds to eew for you, then fine. But if soggy dry toast that’s been dipped in milk sounds amazing, then go for it because it really works!

Why does it work? Simply because both warm milk and dry toast are good for your stomach. There’s no science behind it, but if it works for others there’s no reason why it can’t work for you, too.

No, rice water doesn’t sound amazing – but, heck, it works.

Take a cup of white rice, wash and boil it in one and a half cups of water, before straining and preserving the water.

Then, sip the water.

This method is especially potent and should make your body want to stop vomiting within minutes.

How to stop vomiting? Aniseed can help. It is another one of those that people either tend to love or hate.

If you happen to love it, take a tablespoon of aniseed and steep it in a cup of boiling water for ten minutes before drinking once it’s cooled.

Mint and honey sounds awesome, doesn’t it? And it is!

Add a single tablespoon of dried mint leaves to your cup of tea. Then, pour more hot water into the cup before covering with a lid for 10 minutes.

Filter, add a pinch of honey and drink.

Take two activated charcoal capsules each hour with a glass of water or until you start to feel better.

That said, the maximum dosage for adults is 5g, so you will not want to exceed that.

Vinegar is another of those all-rounders that can cure so much.

Here is a good tip on how to stop vomiting: take a teaspoon of apple cider vinegar and dilute it with half a cup of water. Then, rinse your mouth with this solution.

We’re often told that yogurt is good for the stomach – and this is correct. If you’re not feeling too well and keep vomiting, yogurt might be the right thing you need.

In fact, if you eat yogurt more often, you could prevent a vomiting episode altogether in the future.

How To Prevent Vomiting?

All in all, vomiting isn’t nice, but feelings of nausea can be even worse. Take good care of yourself. Eat well, drink well and live right.

The best recommendation would be to consult your doctor before starting any self treatments.

Do you have other tips on how to stop vomiting? Feel free to share your thoughts in the comment section below.