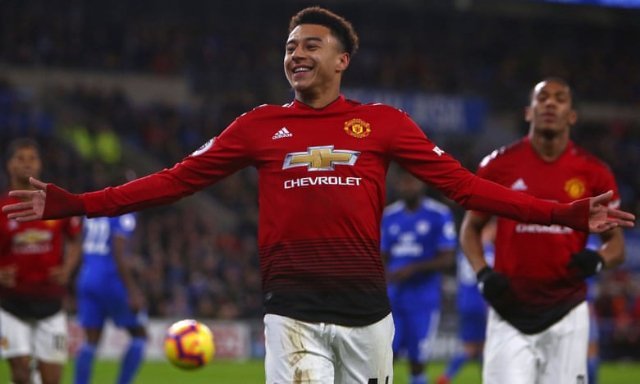 Ole Gunnar Solskjaer got off to a perfect start as Manchester United’s interim manager with a 5-1 thrashing of his former club Cardiff.

The former United striker succeeded boss Jose Mourinho, who was sacked in midweek and got his first win courtesy of a performance that will encourage United fans as some of their more marginalized talents came to the fore in a performance full of attacking intent.

Marcus Rashford’s stunning free-kick, a deflected effort from Ander Herrera and a fabulous team goal by Anthony Martial effectively won the contest before half-time for a United side inspired by the recalled Paul Pogba, who had a hand in all three first-half goals.

Victor Camarasa’s penalty briefly gave Cardiff hope as they reduced the arrears to 2-1, but Jesse Lingard won and scored a contentious second-half penalty and then rounded Neil Etheridge to tap into an empty net at the death to make the result safe.

It is the first time United have scored five goals in a Premier League game since legendary manager Sir Alex Ferguson’s last game in charge – a 5-5 draw with West Brom in May 2013.

An Actress Is In Dubai With Her Friend’s Husband – Tonto Dikeh Spills the...

Violette - November 1, 2020 0
Big Brother Naija 'Lockdown' winner, Laycon have been announced as the new brand ambassador for mobile giant, OPPO, as he continue his good form...

Johnson Olumide - February 18, 2020 0
Here is a brand new single from Okoh Blessing widely Known As “MBG” one of the South Finest Artist Displaying his versatile style of his music...

Zoe Kravitz files for divorce from her husband Karl Glusman after 18 months of...

Violette - January 3, 2021 0
American actress Zoe Kravitz has filed for a divorce from her husband Karl Glusman just 18 months after they walked down the aisle, as...