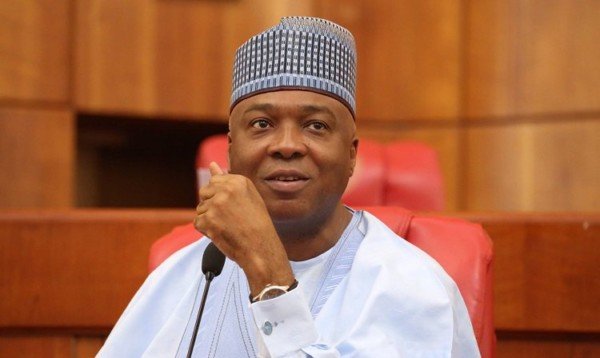 Adams Oshiomhole, National Chairman of the All Progressives Congress (APC), on Wednesday led a song filled with chants of ‘thief’ against Senate President Bukola Saraki, who was a member of his party until July 2018 when he defected to the Peoples Democratic Party (PDP).

During his speech at the APC presidential rally in Lokoja, capital of Kogi State, Oshiomhole appeared to be set on a lengthy dig at Atiku, only for him to switch to Saraki in a flash.

“I challenge Atiku Abubakar, the candidate of PDP. We will publish the record. In his election in 2011, Atiku lost in Adamawa; he lost all the three senatorial seats,” he began, before going on to explain how three senators lost an election in 2015 only for Atiku to insist otherwise.

“President Obasanjo called me; I was in Labour; I was the real opposition. And he said, ‘listen, now listen, o ti to (it is enough)… ole, ole (theft, theft) will kill you. My own comrade, I need you to say… because when they talk of rigging and manipulation, they are the sustenance of rigging.

“Atiku wants to become Chairman of INEC, his Vice President wants to become Inspector General of Police. Their campaign Director-General is the man who presided over the liquidation of Societe Generale Bank after they had collected the deposits of very poor people. Bukola Saraki.”

At this point the crowd chanted ole (thief).

Oshiomhole then broke into a song during which he chants “Bukola Saraki” and the crowd respond with “ole” (thief).

At some point, he mixed it with “PDP”, to which the crowd also responded with “ole” (thief).

Violette - July 2, 2019 0
An Instagram user @modelinakitten, who claimed that her nude photo was leaked on her Instagram page, took to the platform to apologize and also share...

Johnson Olumide - February 17, 2020 0
In Response to rumors circulating for months now since Kylie Jenner then 17 years-old went ahead and did a cosmetically-enhanced lip job as a...

‘I Have Photos Of All The Married Women Iyanya Has Slept With’ – Ubi...

Johnson Olumide - March 21, 2020 0
In a 3-part series for TheNative Magazine about the Iyanya VS Ubi Franklin beef, journalist Joey Akan wrapped it up tonight with an exclusive interview with...