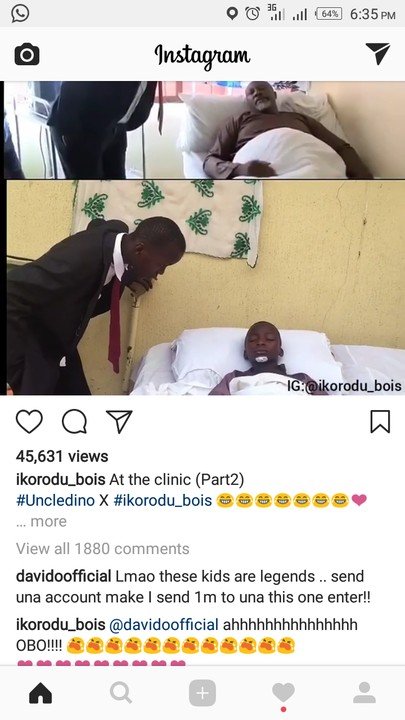 Davido was super impressed by the comic style of the bois recreating popular videos, that he messaged them to send account no to receive the sum of one million naira for perfectly recreating senator Dino melaye’s hospital video.

Davido made this known when he commented on the video posted on the kids official Instagram.

Recall earlier today we reported that Davido also met with the three bois after they recreated his from the above stage entry at his concert last year. 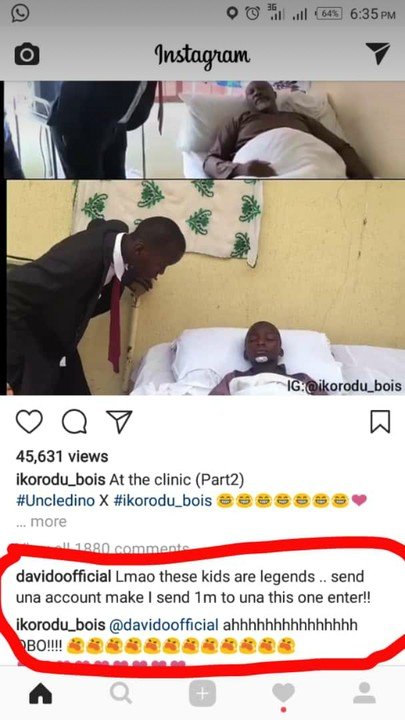 Violette - November 10, 2019 0
Reality Star, Esther is not taking it slowly as she continues to dazzle her fans with stunning pictures. The model and brand ambassador who is...

Violette - January 31, 2020 0
Taylor Swift reportedly decided to give the Grammys a miss after they couldn't guarantee she had won. The 30-year-old singer was nominated in a number...

Johnson Olumide - December 20, 2019 0
Serena Williams may be one of the world’s highest-paid female athletes, but she says she’s never been motivated by the money. “I’ve actually never played...

#BBNAIJA: ‘Tacha Is Not Here For The Hype’ – Teebillz Says As He Claims...

Violette - November 16, 2019 0
The CEO of Tacha's new management, Teebillz has make a shocking revelation about the reality star concerning endorsement deals. Tacha who has been endorsed by...