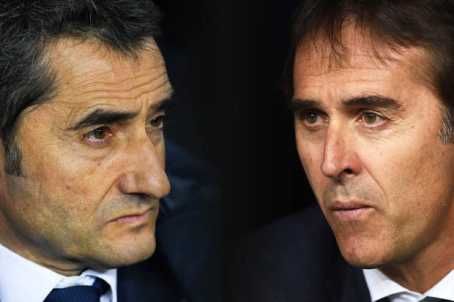 Barcelona Manager Ernesto Valverde has said he sees Atletico Madrid as a bigger threat to their hopes of winning the La Liga than Real Madrid.

Barca are currently top of the league and on course for another title win, with a five point gap ahead of 2nd placed Atletico.

MySportDab report Third-placed Sevilla are a whopping five points further back and are above Real Madrid on goal difference.

And Valverde admits he does not look that far down the table and instead says they are concentrating more on Diego Simeone’s Atletico Madrid.

“We look more at who is immediately behind us,” he said.

“I value both Atletico and Real Madrid very highly because one is a great team and the other never gives up.

“But you have to look more at the one that is five points behind.”

Barcelona have strengthed their squad so far this January transfer window, signing Kevin-Prince Boateng from Sassuolo, while they paid Ajax £65million for midfielder Frenkie De Jong, who will move to the Camp Nou in the summer.