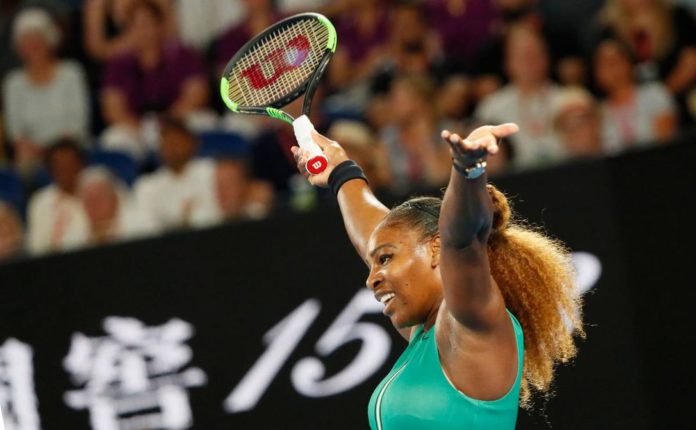 Serena Williams swatted aside Canada’s Eugenie Bouchard in straight sets to continue her quest for a record-equalling 24th Grand Slam title at the Australian Open.

Not everything went the 37-year-old’s way, but she demonstrated why she is considered the tournament favourite.

Ukraine’s Dayana Yastremska, ranked 57th, awaits her in the third round.

Williams is playing in her first competitive tournament since her defeat by Naomi Osaka in the controversial US Open final last September, yet looks to be the woman to beat at Melbourne Park as she targets her first major win since giving birth.

Although careless with her service game in the first set, she went on to crack 22 winners in a dominant performance.

“It wasn’t an easy match – Genie has been to final of Wimbledon and other Grand Slam semi-finals,” Williams said.

“I’ve not had many matches since last year but it is OK.”

Starting after 9pm local time after a lengthy day session, there was an ominous start for 24-year-old Bouchard when she coughed up her serve inside two minutes after successive double faults.

Backed up by a hold to love and another break, most inside Rod Laver Arena feared they would get little for their money as Williams looked set to win with ease.

Then the match took a strange twist, with neither player able to hang on to their serve in any of the next five games.

Williams eventually broke that pattern to seal the opener, cranking up her serve and holding for only a second time in the set to go ahead.

Bouchard burst on to the scene in 2014 when she reached the Australian Open semi-finals as a teenager, backing that up with another last-four appearance at the French Open and going one better at Wimbledon before being outclassed by Petra Kvitova in the final.

Understandably she was touted as the sport’s next female superstar – but that has failed to materialise.

The Canadian reached number five in the world soon after that run, yet her tumble down the rankings since – exacerbated by injury problems last year – almost resulted in her dropping out of the top 200.

In the build-up Williams praised her fighting spirit and Bouchard did show a glimpse of that at the start of the second set.

After failing to hold serve in the opener, she finally found some form with her serve in the early stages of the second, holding twice as her first-serve percentage rocketed from 56% to 86%.

But Williams reasserted her control from 2-2 onwards, losing just six more points as she claimed five games in a row to win in 70 minutes.

Johnson Olumide - February 17, 2020 0
The First Lady of the Chocolate City Record Label downed this sexy black laced dress outfit to an event during the week, coupled with...

Violette - May 9, 2020 0
Controversial rapper Tekashi69 has broken the Instgram live record views after surpassing 2M views. Tekashi69 mght have just been released from prison but he still...

Violette - May 12, 2020 0
Netflix has set an official date for the premiere of Rythm+ Flow, a long awaited hip hop competition series hosted by Cardi B, T.I...

Violette - December 22, 2019 0
Grammy award nominee, Burna Boy is the best artist in Nigeria for the year 2019 according to music platform, MTV base. Burna Boy who was...

Johnson Olumide - February 17, 2020 0
First of all My Gf  Teeka asked me last Night to play Zayn Malik New single Pillow Talk, so since i didn't have it...