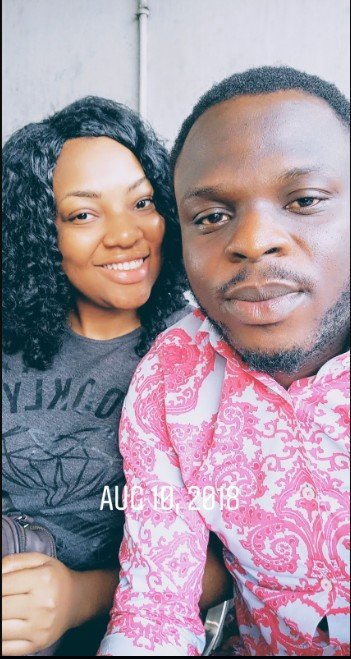 The Nigerian pastor made headlines months ago after his sex tape with his former lover surfaced online, has finally spoken publicly for the first time on the issue.

Apostle Chris Omatsola, a senior pastor of Zionwealth Of Life Assembly in Lekki, Lagos, narrated how he met his ex-girlfriend, Princess Tamaratokoni Okpewho and what allegedly transpired between them.

Read below the lengthy piece he shared online on Thursday, January 3rd 2019.

Since the libelous allegations against me by my former lover, Princess Tamaratokoni Okpewho, went viral late last year, I have been inundated with calls and messages from Nigerians all and sundry both at home and abroad.

I have got threats to my life and ministry. Initially, I thought I should let it slide, but after sharing my thoughts with some close friends and family members, I was advised to go public with my side of the story to set the records straight, because I am aware she will also come out with more lies and blackmail.

I have since realized that it is important I state it so people will not continue to misconstrue my silence for guilt. Journalists and bloggers should note that I will make no further comment on this matter from henceforth.

This is not in anyway to justify my wrong act of fornication. What you are about to read is the truth from my heart for which I will give account to God and God alone.

I met PRINCESS TAMARATOKONI OKPEWHO (aka Toks David) sometime in September 2017 just before the Lekki Toll Gate after Quilox night club around 4:40am.

I was returning from a vigil in Adetokunbo Ademola, Victoria Island, that fateful day. She flagged down my car on the lonely road. She appeared drunk. Because it was dark and I thought it could be dangerous, I stopped and picked her.

When we got to my house that night, she slept on the couch in the sitting room, while I slept in the bedroom.

The following morning after she was sober, I asked what she was doing by that time of the night alone and drunk on the Lekki-Epe Expressway.

She started sobbing and shared the sad story of her life, how family financial pressure and bad friends pushed her into this funny lifestyle. I believed every word that came out of her mouth.

She told me that she was a graduate of Computer Science from Landmark University. She said she left Port Harcourt, Rivers State, for Lagos in search of greener pastures because of the hardship back at home.

She told me her dad (Mr. Nobert Okpewho) is an indigene of Abraka, Delta State, and her mom (Mrs. Sarah Okpewho) was from Bayelsa.

She lamented how her mom who had 2 kids from 2 different fathers out of wedlock before marrying to her dad whom she had the three of them for has serious health challenges and since she’s the first daughter of the family and because things are bad for them she felt obligated to help out as much as she can even though her dad never supported her coming to Lagos but he had no choice since she foot the bills.

From that moment, I saw her not only as a friend, but as a younger sister. I loved her. I saw in her an innocent lady who was ready to risk her life and do all she could to put a smile on the faces of her siblings and parents. I advised her to stop that kind of life because Lagos is a very dangerous place and it is not right in the sight of God.

Honestly, our sexual relationship started from there as I became emotionally attached to her. That you may say, was the beginning of the downfall of Apostle Chris Omatsola.

Fast forward to February 2018. I was so busy trying to get her a good job with my links. She moved in with me, got a better paying Job. Before moving to my house, Princess lived with a friend named Amaka, who stayed in Ikota Ghetto. Amaka stayed with her hemp-smoking boyfriend (Turna) and about five others in one room inside a beer parlour and semi brothel.

Prior to this time, Princess only visited my house. So, she pleaded I allowed her to stay with me since I already promised to marry her. She said she was not comfortable in Amaka’s house since she now had a new life. I was scared initially. But because of what I thought was my love for her, and how she was so in love with me, I accepted and we started staying together in my three bedroomed apartment on Harmony Estate, Lekki.

Amaka was aware; Ese Okpewho her younger sister and Tosin her former course mate were also aware, even though she always lied to her parents and friends that she was not staying with me because she wanted us to get married by all means. She was such a jealous lover, so over protective, she frowns at the sight of any woman around me, even female calls on my phone irritates her. She checked on my WhatsApp chat regularly.

Did I promise her marriage? To be honest, YES. I promised to marry her, but on the condition that she changed her ways and accept God genuinely. She actually did change because she stopped night clubbing and smoking, but hid to take alcohol.

She started going to church with me as she became my prayer point. We prayed and did fasting together regularly, and I taught her the word of God. At a point, she became almost more fervent as she would wake me up for midnight prayers and morning devotions.

I bought her Christian books and we went out for weekend evangelism together. She waxed fervent and prayed in tongues, while in my house.

She dissociated herself completely from bad friends and started posting Scriptural verses online. She became serious in the things of God.

I later accepted to formalize our relationship and her mother said we should come to Port Harcourt to see her when we are ready.

We both planned to go see her parents for formal introduction in September 2018.

Princess and I had more than 10 sex tapes of ourselves on our phones as she enjoy filming sex. I trusted her so much that I kept money in her account. At a time, I kept over N900,000 with her because I thought I was a reckless spender and she was frugal.

However, Princess’ attitude started changing when Davido’s gifted his Chioma with a 45 million Naira Porsche SUV car on her birthday during the assurance era. In August 2018 after one of her former Landmark course mates, Mary who is also a runs babe, held a birthday party in Eko Hotel and Suite sponsored by her Yahoo boyfriend, who also flew her to Dubai and spent extravagantly for the celebration princess attitude got worsened. She know I loved her so much and will never leave her, so she can misbehave and take undue advantages of my undying love for her.

I regret my actions of having premarital sex that was filmed with her; I just can’t imagine how carnality and stupidity got such a strong hold of me. I sinned against God and my body. I have made my way right with God and I believe He has forgiven me.

I am happy with myself and my life. Even though Princess Okpewho has proven time and time again that she would stop at nothing to see me down and dead. I still love her.