Home Entertainment My Nigerian Boyfriend Has The Best And Biggest D!ck I Have Ever...

Gambian actress has disclosed that her Nigerian boyfriend who bought her the G-Wagon has the biggest d!ck’ among all the boyfriends she has ever dated.

The Gambian actress who has been an ‘item’ on various news portals on a daily basis claim her man is not only ‘pocket endowed’ but he is well endowed in the ‘downside’ too.

In an interaction with her fans via a Question and Answer Session on her Instagram Story, a fan quizzed if her likeness for s$$x toys won’t affect her new relationship.

Princess Shyngle responding to the fan said that she doesn’t need a s$$x toy because her boyfriend has the best and biggest d!ck she has ever had.

According to her, she will not be even needing those toys again since her boyfriend is endowed and that she has thrown all her s$$x toys away.

She further indicated that Nigerian men have big d!cks and it probably indicates she loves the ‘Naija cassava pass Ghana’s own ooh’.

Recall somewhere August last year, Princess Shyngle made a damning revelation by saying that 99.9% of the men she dated could not satisfy her so her s$$x toy was doing most of the work those she dated couldn’t do.

She opined that she used ‘s$$x toys’ because the majority of the men she was in a relationship with performed poorly in bed hence she resorted to her ‘s$$x toy’ because it gave her s$$xual gratification.

Well, it looks like Princess Shyngle has found a Nigerian boyfriend who can satisfy her. 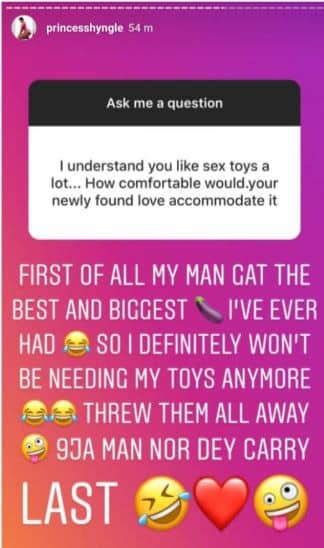