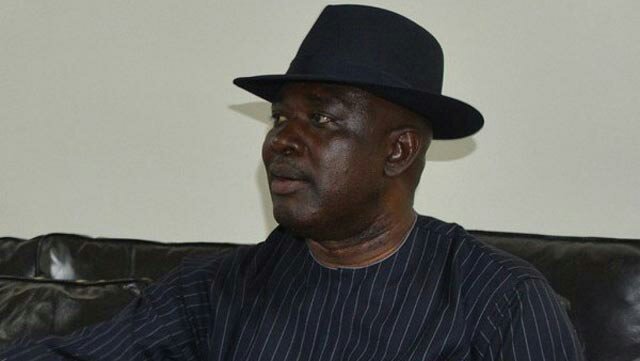 The Federal Government on at the weekend said it was losing $9 billion (N3.2 trillion), annually due to its poor investment in agriculture prior to the coming of the Buhari administration.

The Minister of state for Agriculture, Senator Heineken Lokpobiri, who made the claim at the Afe Babalola University, Ado Ekiti, (ABUAD) during a reception and lunch in his honour by founder of the university, Chief Afe Babalola, noted that before President Buhari came on board, Nigeria was losing $9 billion revenue earnings annually in agricultural sector.”

The minister said Nigeria was also losing over 240 metric tonnes of fish production in the world market that could have increased foreign exchange earnings and boosted the economy.

“In Nigeria, we are not producing enough fish to feed our population, that is why we are relying heavily on importation.

The deficit between demand and supply was 2.5 million metric tonnes annually which is about 320 containers.

You can imagine the quantum of revenue we lost to low production in this sector alone,” he said.

READ ALSO
“I Would Not Criminalise Gays And Ensure They Have Protection Of The Law”-Presidential Aspirant,Donald Duke

According to him, “Knowing that most of our products were being taken to other West African nations to be processed and rebranded, we introduced certification policy for all the products in order to have right and proper certificates for our products and in order not to affect the Gross Domestic Products (GDP) negatively.

When I visited Belgium, the Minister of Agriculture there told me the country’s annual revenue earning in agriculture sector was 35 billion Euros.

This is a country with less than five million population.

“He further told me that the difference between agriculture in Africa and the West is technology and innovation.

That was why the Federal Government in partnership with the World Bank, earmarked $250 million to train young graduates in agribusiness.

Meanwhile, a reseach by the Federal Ministry of Science and Technology says, agriculture is the highest contributor to global warming in Nigeria.

This research debunks the long-time general assumption that energy is the highest contributor to global warming.

READ ALSO
Photo: Onnoghen pleads not guilty to all charges, granted bail on self recognition

He spoke at a workshop with theme: “Green Economy Capacity Assessment Workshop” at the Federal Institute of Industrial Research Oshodi (FIIRO), Lagos.

The workshop was a partnership between the University of Reading, U.K, and FIIRO to brainstorm on how to improve the Green Economy and mitigate environmental degradation.

“A recent research by our ministry shows that the agriculture sector is the highest contributor to global warming in Nigeria and also the use of land, contrary to what we believed.

“Research has proven that it is not energy, and so, if we are able to stop the use of chemical fertilisers, burning of agricultural waste and turn them into usable products, our society will be better.

“The Federal Government is already making efforts at having low carbon development programmes.

The President has signed the Paris Agreement that took place in 2015.

Johnson Olumide - March 21, 2020 0
A follower criticized Cossy Ojiakor after she shared a photo of Denrele Edun checking out her boobs and Cossy had some words for the...

Violette - July 1, 2020 0
The leg work and Zanku dancer, Poco Lee is in the news today and it is about a used condom. And everyone has been talking about...

Seems One of the Ladies Who Accuse Davido of Impregnating Her Has Been Arrested...

Violette - November 10, 2019 0
Recall Drama that unfolded yesterday when a two ladies went viral for posting a video of themselves accusing Davido of Impregnating one of them. Seems...