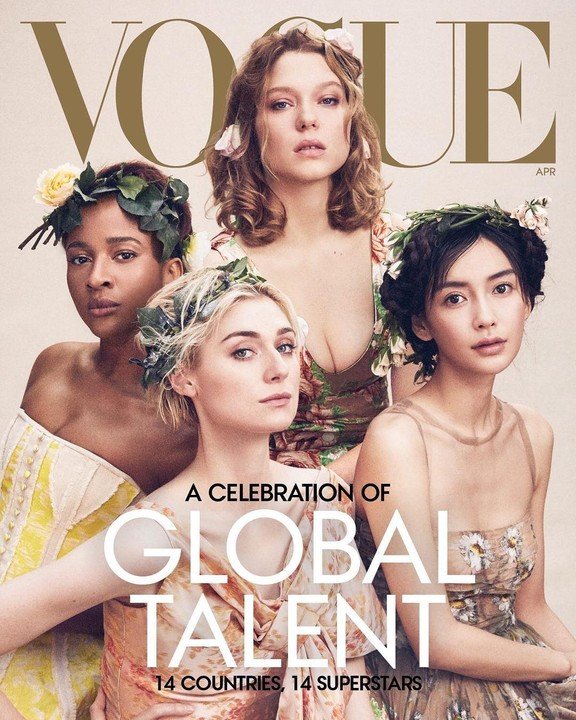 Our very own super star, Adesua Etomi-Wellington is one of the four women on the cover of Vogue US magazine’s latest issue.

The April 2019 issue is tagged “The Global Issue” and has two covers celebrating 14 global superstars from 14 different countries.

Read what they wrote about Adesua below…

“The Nigerian actress Adesua Etomi-Wellington can’t walk down the street in Lagos without getting mobbed, and if she’s with her husband, the actor Banky Wellington, forget it—a trip to the grocery store launches a thousand selfies.

But unlike some of her cohorts on the shoot, she’s more of a third-culture kid, born in Nigeria and raised mainly in England. (She speaks in two fluent accents—Lagos and the British Midlands.)

She went to school in Coventry, studied drama at University of Wolverhampton, and then got a nine-to-five job with the fashion arm of a large supermarket chain. It was then that, as she puts it, “I can’t explain it—I felt I had to go back to Nigeria.”

That was toward the end of 2012, and in the past six years or so she has become one of the biggest stars in Nollywood, Nigeria’s relatively young film industry.

The Wedding Party (2016), a colorful and witty romantic comedy in which she plays the lead opposite Wellington, was the highest-grossing film in the history of Nigerian cinema, until it was eclipsed by its sequel, which also starred Etomi-Wellington.

In fact, she points out, of the four films that have done best for the relatively young industry, she is in three.

“I love, love, love Nollywood,” Etomi-Wellington says brightly over tea and biscuits at the shoot. “I feel like she’s my baby, and it’s my responsibility, along with a lot of other performers, to grow her.””