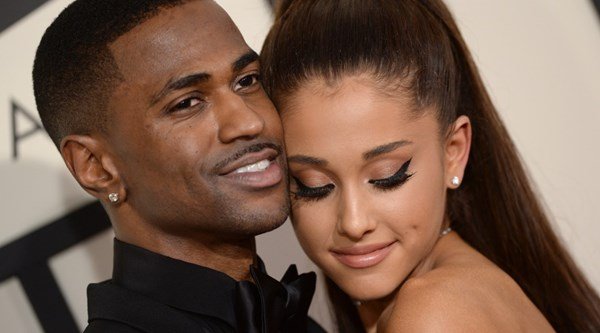 A source tells PEOPLE.COM that Grande, 25, recently spent time at an L.A. recording studio with the 30-year-old rapper.

The pop star and the rapper split in April 2015, after nearly nine months of dating

On Thursday, TMZ posted photos of the pair sitting together in a car outside of a recording studio in Los Angeles.

The pair were joined in the vehicle by Grande’s dog Toulouse, who has recently made cameos in the pop star’s music videos for “7 rings” and “thank u, next.”

Reps for Grande and Sean did not immediately respond to PEOPLE’s request for comment.

The exes, who split in April 2015 after nearly a year together, previously collaborated on three songs.

The pair first teamed up for Grande’s “Right There,” released on her debut album Yours Truly in 2013, followed by “Best Mistake,” which appeared on 2014’s My Everything. Grande was also featured on “Research,” from the rapper’s 2015 album Dark Sky Paradise.

Grande and the rapper were first linked in August 2014, when they were spotted sharing a kiss at a movie theater. Although the couple wasn’t afraid to pack on the PDA during their relationship, they called it quits in April 2015 after about nine months of dating due to a conflicting tour schedule, E! News reported at the time. In a joint statement, the pair said they “care deeply for each other and remain close friends.”

Shortly before their breakup, Sean gushed about his relationship with the singer to Ryan Seacrest, saying: “Ariana is very, very special. She’s very special to me.”

As one of Grande’s high-profile exes, Sean earned himself a mention in the singer’s smash hit “thank u, next” — and got an even cheekier shout out in the accompanying music video.

On the track, Grande sings: “Thought I’d end up with Sean / but he wasn’t a match.” But in the Mean Girls-inspired music video for the chart-topper, she had nothing but positive things to say about the rapper in her “Burn Book.” On the page dedicated to Big Sean (born Sean Michael Anderson), Grande said he was “so cute “and “so sweet” and “could still get it.”

Although Grande has yet to comment on the photos of her and Sean, this isn’t the first time the singer has been seen hanging out with following her breakup from Davidson.

In December, the singer shut down rumors that she had rekindled her romance with former backup dancer Ricky Alvarez after the pair were spotted in New York City together and had a funny back-and-forth about the lyrics she dedicated to him in “thank u, next.”

Johnson Olumide - May 12, 2020 0
The 2018 CMT Music Awards has finally come and gone. Last night’s even was held at the Bridgestone Arena in Nashville, Tennessee, and some of the biggest names...

Violette - October 2, 2021 0
It seems the final few days at the ongoing Big Brother Naija season six reality show will get more intense and dramatic as Cross...

Johnson Olumide - December 20, 2019 0
Kourtney Kardashian has been seen for the first time since she split with Younes Bendjima. And she was not alone as she was joined by...

Violette - November 7, 2020 0
Billionaire daughter and fashion blogger, Temi Otedola has shared her experience while on set of the recently released movie, “citation”. Temi who made her acting...