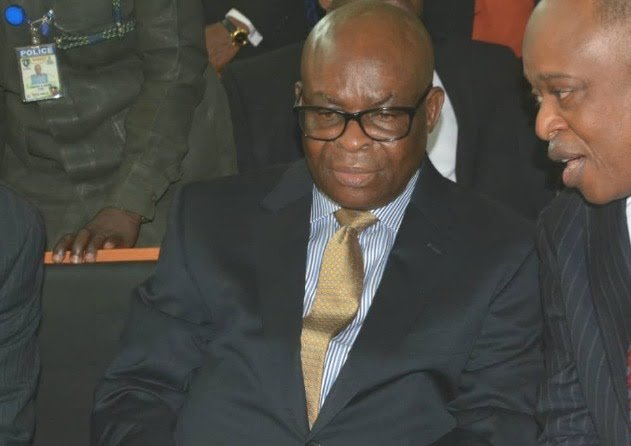 The federal government has closed its case against Walter Onnoghen, suspended chief justice of Nigeria (CJN).

The government closed after calling three witnesses to the stand.

At the Code of Conduct Tribunal (CCT) on Thursday, Aliyu Umar, counsel to the government, announced that they closed the case despite the fact that they had initially listed six witnesses.

Umar said the three other witnesses could still be called to the stand if the defence wants to cross-examine them.

“I have called three witnesses. If the defence needs them, I can call the other three,” the lawyer said.

Awomolo then informed the tribunal that they intend to file a no-case submission but they would need time to write an address.

“We intend to take advantage of section 303 of the Administration of Criminal Justice Act (ACJA) 2015 on no-case submission,” he said.

“If your lordship permits me to write a written address. I’m praying to be given proceedings of 18th and today.”

Thereafter, Danladi Umar, CCT chairman, ordered Awomolo to serve his address on the prosecution on Wednesday.

Umar then fixed March 29 as day counsels would adopt their addresses.

Onnoghen is standing trial on a six-count charge bordering on false asset declaration.

16 Slangs made Viral by Nigerian Celebrities

Munakur Jantiku - January 13, 2020 0
Celebrities have played a huge role in the influence of a large number of youths. From educating to connecting with the audience emotions, these...

Violette - September 21, 2021 0
It's currently a memorable day for Kemi Ayorinde, baby mama of talented singer and songwriter, Lyta, as both parties finally reunites after some dramatic...

Davido Sends another $40,000 Rolex wristwatch to his Cousin as Gift

Johnson Olumide - December 6, 2020 0
When you remember songs like ema Dami Duro, emi Omo baba Olowo, you know Davido is not here to play as the Nigerian singer...