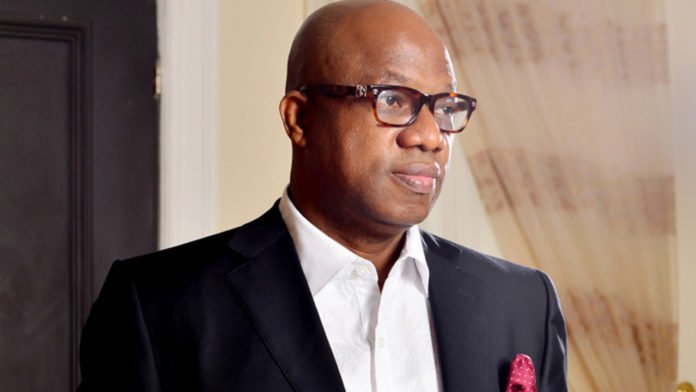 Winner of the March 9, governorship election in Ogun state, Prince Adedapo Abiodun, on Sunday declared that if some “men were God,” he would not have become the Governor – elect of the state.

Abiodun who revealed that what had kept him going in the journey of life despite daunting challenges is his absolute and unshakeable faith in God, saying such faith was anchored on the message of Christ in Mark 11:23, which assured that an unwavering faith could relocate a mountain from one point to another.

The successful entrepreneur, oil magnate and real estate player made this known at St. James Anglican Church, Iperu, his home town, during a Thanksgiving Service to appreciate Almighty God for protection and victory at the gubernatorial poll in the Gateway state.

The Governor – elect on the ticket of the All Progressives Congress (APC), recalled that he was pained and heartbroken in 2015 when he lost in the contest for the Ogun East senatorial seat but kept pressing forward undaunted because an inner voice was telling him he still has a vision yet to be accomplished.

He pledged to run an equitable, just, accountable and a transparent government which would create a public, private partnership for the benefits of Ogun state, the citizens and residents.

Abiodun said: “my victory has a hand of God. My friends and people around me were asking, “Dapo, what has kept you going ahead in your ambition? What has propelled you? But I remained focus in God and unshakeable. For you to succeed, you don’t have to have doubts in your mind.

“In my spirit, I have a mission for my country. I didn’t give up. For you to succeed, you should learn to get up and go. Also, you should have convictions.

“I always refer to the book of Mark 11:23. Honestly if men were God I wouldn’t have been here. In the 90s when I came back from the university, I offered to serve the people of Ogun state but I came second in that contest.

“Immediately after the primaries I joined Otunba Gbenga Daniel and campaigned for him, eventually he became governor.

“Again, In 2011 I joined hands with the incumbent governor(Ibikunle Amosun) to win the election. In 2015 I offered to become the senator but I wasn’t successful in that race but I was pained and heartbroken but I didn’t give up because something continued to tell me that I have a vision which is yet to be unaccomplished.

“Today, what I want you to take home from here is that we should never give up because many times when we meet disappointment, it is just an avenue to close a window for a double door to be opened.

“I want to assure you that we would lead an equitable and a transparent government which will create a public , private partnership for all, so help me God.
“I want to thank you all for been here today. We would have postponed this thanks given service until after inauguration but we want to quickly acknowledge the fact that this is an act of God.

“Few days ago, I was with one of the paramount rulers in the state to thank him for his support and that which was rendered by his people and he said to me that, even the leafs are singing and dancing over your victory.

“I pray may all of us enjoy this kind of victory in our individual homes in Jesus name.”

In his sermon, the Archbishop Ecclesiastical Province of Lagos, Olusina Fape, said it is God that made Abiodun Governor – elect for a purpose in Ogun state.

Fape said Abiodun’s value could only be determined when he begins to effect real and positive changes in the lives Ogun people and the state.

He advised the Governor – elect to shun sycophants and surround himself with people of integrity when assembling members of his cabinet, praying that God would help him to succeed.

Fape also advised him not to allow himself to be carried away by the excitement and euphoria of electoral victory, lest he forgets those who God used to help him to the position of a Governor after being sworn – in.

The Archbishop who also doubles as the Bishop of Remo diocese of Anglican Church, urged him not to turn his back on the structure of the All Progressives Congress(APC) in the state as it provided him the vehicle on which he rides to power.

Fape said: “A stream that forgets its source will definitely go dry. It is not that we don’t have people with credible character in this country, but our problem is nepotism.

“And I will advise you to select able people of Faith to be able to be a ruler over hundreds and thousands of men and women.
“There are many things yearning for attentions at this auspicious time you are coming in as governor.

Your father and mother are your first destiny helpers. So, in your own case, as governor, you have become parent to all and sundry in Ogun state.
“Ask God for destiny helpers to work with you to be able to take Ogun State to a greater height.

“As a consumate entrepreneur, we know your antecedent, you have not come to steal the stateSource: to build your house, but have been blessed already. You are already loaded.

“You need destiny helpers to fulfil all your electoral promises”, said the Bishop. God has appointed everyone to succeed. You and your wife (Bamidele) will not fail. Whatever you lay your hands upon, you will succeed.”

Do you have a hot story or scandal you would like us to publish, please reach us through Info@creebhills.com  or WhatsApp: +234 701 714 1845 or Facebook : Creebhills  Instagram : Creebhills