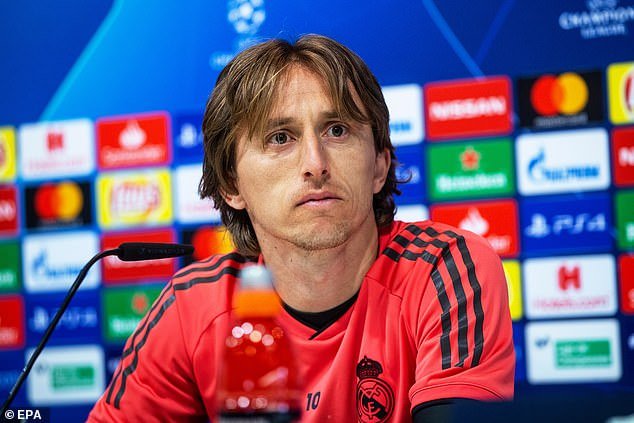 Luka Modric says Real Madrid are struggling in the current campaign due to the club’s inability to sign a quality replacement for Cristiano Ronaldo after his switch to Juventus last summer.

According to Daily Mail report, the Croatian playmaker, who was speaking Monday ahead of the Los Blancos Champions League last-16, reverse fixture against Ajax on Tuesday insists the club’s current strikers have also failed to step into the role vacated by Ronaldo.

The Ballon d’Or winners further hinted that the major problem facing the Galaticos is centered on inconsistency and lack of goals this term.

At the last count, Real Madrid could not account for a single goal in 180 minutes of football, in two Clasico fixtures against Barca last week.

A performance that saw Real Madrid sent packing from the Copa del Rey as well as going down 12 points adrift of Barcelona at the summit of the La Liga log,

Surprisingly, the Champions League is now the only available window, the Los Blancos can seek a silverware in the 2018-19 campaign.

Interestingly, Real Madrid have failed to sign quality forward as the Portuguese replacement, but opted for youngsters like Vinicius Junior and Mariano Diaz.

“The absence of Cristiano is something every team would feel; to find a replacement for Cristiano is almost impossible,” Modric told journalists.

“Given what he did for us and this club, we miss Cristiano. The club wanted the other players to make up for what he did, divided between the strikers and that is not easy.

“Cristiano scored 50 goals and you can’t find someone today who scores that many. Some of us have to take a step forward and, while not scoring 50, what we need is two or three players who score 15, 20, or 10 goals and we don’t have that.

“That is our biggest problem this year. For example against Barca in the cup we had many chances and when you don’t take advantage your opponent punishes you.

“The club tried, and it seems good, putting faith in other players like Gareth (Bale), (Marco) Asensio, Karim (Benzema); they brought in Mariano, Vinicius is here.

“(Vinicius) is doing very well for the age he is but sometimes things don’t go how we wanted them to,” Modric summed up.