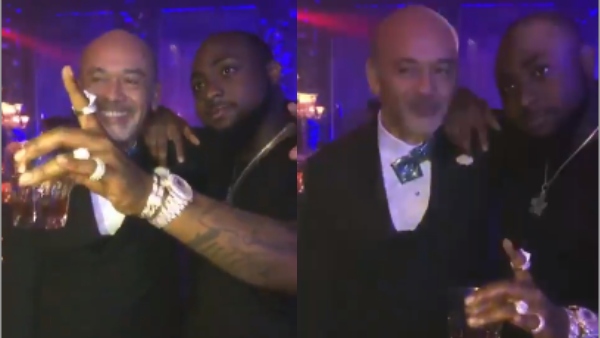 Nigerian Super Star Artiste Davido was chilling in Morocco last night with the biggest names in the Entertainment , Fashion and Lifestyle Industry worldwide while attending the Wedding of Popular British Actor Idris Elba.

Davido was spotted with Christian Louboutin, the famous French fashion designer at a private party which took place last night.

While updates from the meeting is yet to be shared, however Davido was spotted wearing a Louboutin shoe which leads to speculation that he might have become the brand’s ambassador.

Here is a video of Davido with Christian Louboutin below;

Christian Louboutin, is a French fashion designer whose high-end stiletto footwear incorporates shiny, red-lacquered soles that have become his signature.

Initially a freelance designer for fashion houses, he started his own shoe salon in Paris, with his shoes finding favor with celebrity clientele.

He has partnered with other organizations for creative projects including limited edition pieces, gallery exhibits, and even a custom bar. His company has since branched out into men’s footwear, handbags, fragrances and makeup.

Louboutin began sketching shoes in his early teens, ignoring his academic studies. Going through a punk phase, he was in a few films, including 1979 cult classic Race d’ep and The Homosexual Century, which attracted an English-language audience.

His first job was at the Folies Bergères, the cabaret where he assisted the entertainers backstage. He was also a fixture on the city’s party scene, clubbing his nights away alongside Mick Jagger and Andy Warho.