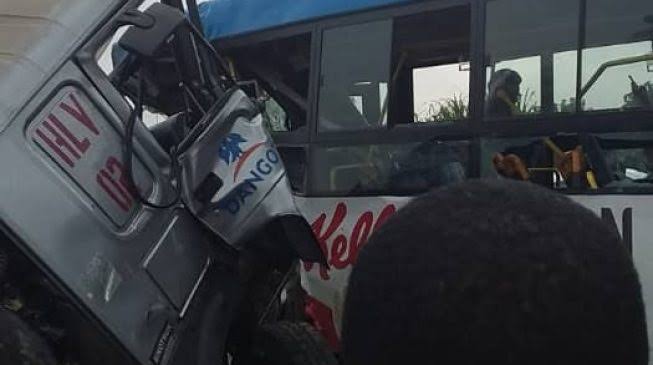 It was a sad day for many as a trailer belonging to the Multinational Company, Dangote Group, owned by Billionaire Businessman, Aliko Dangote skidded off the main carriageway and rammed into a BRT bus on the designated BRT lane. It was reported that the BRT bus was on its way from Ikorodu garage when the incident took place.

The unfortunate incident which took place Tuesday morning in Majidun Awori along Ikorodu Road resulted in many passengers suffering injuries. While eyewitnesses said people died, that is yet to confirmed by the authorities.

However, the Lagos State Traffic Management Authority(LASTMA) tweeted that the injured passengers have been taken to hospitals and the affected vehicles are currently being evacuated.

[10.08am] #Ikorodu #lastmareports
A fatal accident involving a loaded trailer going inw Ikorodu that skidded off the main carriageway to collide with a high capacity bus on the BRT corridor. @TrafficChiefNG @Gidi_Traffic @trafficbutter @lagostelevision @lagostraffic961 pic.twitter.com/feUxQsvqGR