Nigeria Model and Philanthropist, Leo Dasilva has given the reasons why he was unable to make an appearance at the just concluded Lagos Fashion Week.

The former big brother naija housemate who is also a model took to his social media handle to state his reasons.

Leo Dasilva noted this while having a conversation with a fan on his Twitter handle.

The model and reality star revealed that the organizers of the show wanted to pay him with exposure but he told them he’s already exposed. 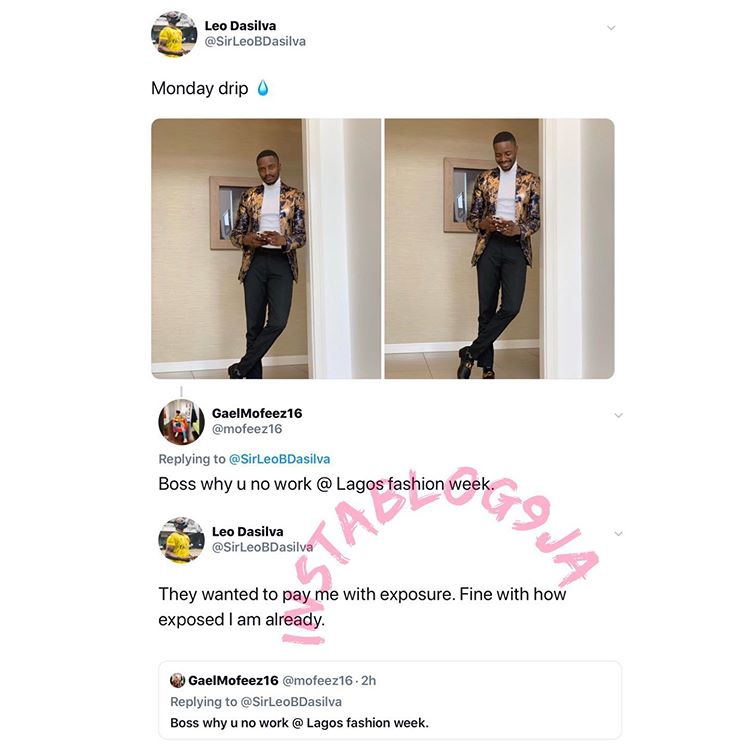 Why do women get overly excited over marriage proposal? – Ifu Ennada

Johnson Olumide - March 21, 2020 0
2018 BBNaija housemate Ifu Ennada is out here getting upset over ladies who get overly excited after being proposed to. According to the actress, this...

Johnson Olumide - February 18, 2020 0
Linda Ikeji whom is Nigerian's Richest Blogger in Africa living in  a house worth over 640 million Naira on the Inland has rebuffed claims that the Tax...

Cardi B ready to file for Nigeria Citizenship (Photo)

Violette - January 3, 2020 0
American singer and songwriter, Cardi B had reveal her intention of becoming a citizen of Nigeria after the recent happening in the United States. Cardi...

You can’t take God out of the Equation – Singer Timi Dakolo As He...

Violette - November 10, 2019 0
Nigeria singer and songwriter Timi Dakolo has announced a huge deal as the year runs out. The popular singer took to his Instagram Page to...