Television reality show bbnaija might be through and gone for a couple of week, maybe many thing will be forgotten or are already forgotten but not the hottest topic of the show which was Tacha’s Body odor saga. 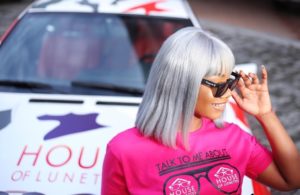 During the show the likes of mike, kaffy, Mercy etc were seen occasionally discussing the disturbing topic, drafting strategies on how to help Tacha’s smell go away but for a long time it brought issues to their fans outside cause no one was really sure of how true the accusations were.

Then it hit the world like a bomb the day Tacha’s and Mercy had the ultimate big fight when Mercy actually confirmed that Tacha has body odor as she insulted her with it telling her how dirty and smelly she was.
Now few weeks after the conclusion of bbnaija 2019,

Tacha had an interview with famous presenter Daddy Freeze who during the interview had to take his time to go close to Tacha to inhale her if she had bad odor which he then confirmed that it’s all false that Tacha doesn’t have any bad smell that she actually smells fine and is ok.

Johnson Olumide - May 11, 2018 0
Nigerian actress, Dayo Amusa , replied a follower who called her out for exposing her boobs on a photo she shared on her Instagram...

Violette - February 25, 2020 0
Veteran Nollywood actor, Kunle Afod has surprised his wife, Desola with a brand new car. This was disclosed by Desola who could not hide how...

Violette - June 22, 2021 0
It was another intense moment at the Big Brother Naija 'Lockdown' reunion show as Tolanibaj opens up on some shocking secrets that happened at...

Violette - May 11, 2020 0
Tonto Dikeh is clearly happy and enjoying herself as she shared some lovely pictures of herself and her son in native attires on their...