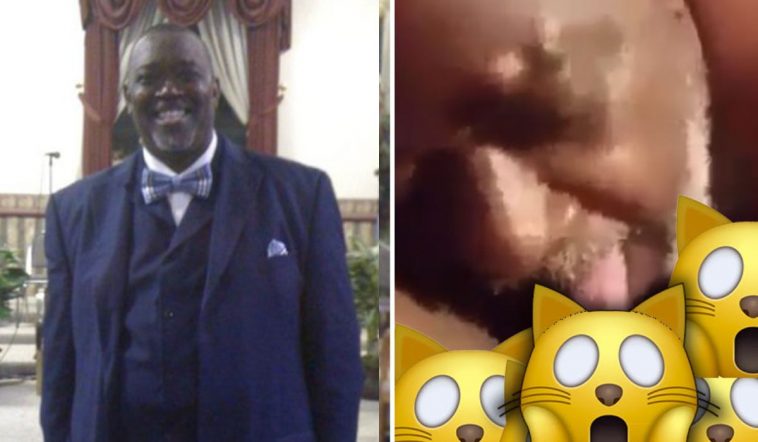 The social media world is currently on a meltdown as the Sex Tape of Pastor David Wilson who is an American Pastor was leaked online.

David Wilson is said to be the Pastor David of Bible Way Ministries & World Out Reach,

on a woman who was alleged not to be his wife.

The video shared online with a caption; “Pastor Wilson out here doing the lords work,” was

originally shared on Twitter Monday afternoon (Oct. 16) and has since been re-posted all

thoughts on the development as different types of comments are currently on Twitter.

Watch Sex Tape of Married Pastor David Wilson and see Some reactions to the viral video below.

I guess we now know what Naira Marley meant when he said "Pastor na enjoyment" he was referring to Pastor Wilson.

Pastor Wilson after saying “Praise The Lord” in Church on Sunday and nobody replies pic.twitter.com/7RniIfXSvb

Pastor Wilson: 2 Sam chapter 23 vs 2
The Spirit of the LORD spake by me, and his word was in my tongue.

Pastor Wilson: The word of the Lord says in Proverbs 18:21…. "Death and Life are in the power of the tongue…"

Seeing ladies talk about this Pastor Wilson’s head so high makes me wonder who has been giving y’all head all these while?

Yeah, Pastor Wilson is good but he is just average. Everything he did in the video are basic head skills tbh

President Mohammad Buhari returns to Nigeria, after 2 weeks of Rest in London (photos)

Johnson Olumide - December 20, 2019 0
Youngbam is truly a blessing to Nigeria Music Industry, with many hit track to his name, After the successful release of his last dope...

Adedokun Moses - November 10, 2019 0
Mercy might have broken the record by becoming the first lady to win the big brother naija show, but she is also doing well...

Adedokun Moses - December 17, 2019 0
Fast rising Nigeria singer and songwriter, Naira Marley has taken to his Instagram Page to share pictures of his garage as he flaunts his...

Ubi Franklin Say No Controversy with Iyanya Leaving his Record Label, as he has...

Johnson Olumide - February 16, 2019 0
PoliticsNGR has been furnished with a transcript of the full statement by the Independent National Electoral Commission, INEC on the postponement of the 2019...