Home Entertainment I Wept After The Court Dismissed Bisola’s Case Against Me- Coza Pastor...

The case between Coza Pastor, Biodun Fatoyinbo and Timi Dakolo’s Wife, Bisola Dakolo has been dismissed and he was appointed the winner of the case living Bisola to pay a One Million Naira bill for Damages to the Coza Pastor. 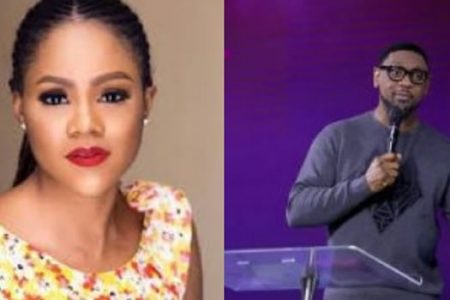 Pastor Biodun Fatoyinbo has once again climbed the alter confidently as he confessed to his congregation of how he felt when the case was dismissed.

He Told his congregation that after everything was finalized and he was declared automatic Winner of the case that he has to shared Tears of victory saying he ‘WEPT’.watch video below

Johnson Olumide - February 17, 2020 0
The Model Of the year according to British fashion council took a deep step further in her career line as she Posed for the...

Violette - November 8, 2020 0
Multiple award winning singer and songwriter, Ayodeji Ibrahim Balogun popularly known as Wizkid have opened up on the main reason why he named his...

Violette - December 11, 2019 0
US based Nigerian rapper and singer, Speed Darlington has blasted popular blogger and former singer, Tunde Ednut as he notes that he's arranging a...