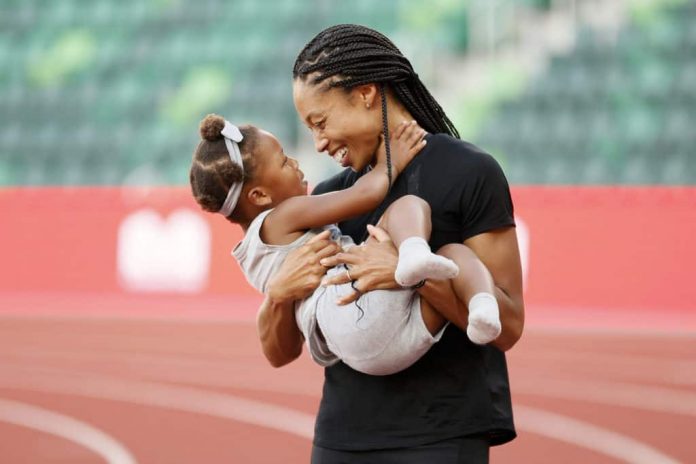 Allyson, who is a mother herself, announced plans to cover childcare costs for mothers participating in the Tokyo Olympics. Allyson is teaming up with her primary sponsor, Athleta, and the Women’s Sports Foundation (WSF) to launch The Power of She Fund: Child Care Grants, according to @thegrio.

The program will commit $200,000 to childcare costs for nine mom-athletes competing in the Summer Olympics.

“As a mom and an athlete, I know first-hand the obstacles women face in sports,” said Allyson, six-time Olympic gold medalist, and three-time world champion. “It was important to me and to Athleta that our partnership reflects that I am more than just an athlete.

In fact, part of my contract includes provisions for my daughter, Camryn, to join me whenever I am competing. But not everyone has access to this type of support from a partner or sponsor.

These grants are about showing the industry that all mom-athletes need this same comprehensive support to be able to participate in their athletic endeavors.”

The grant recipients are Olympic hammer thrower Gwendolyn Berry and Olympic saber fencer Mariel Zagunis, who will each receive $10,000.

The grant recipients will also participate in roundtable discussions about systemic change across the industry, according to The Grio.

“One of my first races back after giving birth to my daughter, Camryn, was the World Championships,” Allyson, 35, said to Fast Company. “Not only was I still breastfeeding and physically and mentally exhausted from being a first-time mom while training and competing — I was assigned a roommate at the competition. There was no way I could bring my daughter into a shared room with another athlete who is trying to get in her zone.”

In other news, Super TV CEO alleged killer, Chidinma Ojukwu in her latest interview changes her story, as she claims “I have nothing to do with Super TV CEO, Usifo Ataga’s death” (watch the video here).

Violette - July 5, 2018 0
Nigerian singer, Runtown is once again in trouble with the law as his estranged label, Eric Many has once again dragged him to court in...

Ric Hassani set to drop the Deluxe Edition of his hit album “The Prince...

Violette - May 14, 2021 0
Afrosoul singer, Ric Hassani has announced the second coming of his much anticipated deluxe edition of his album ‘The Prince I Became’. Ric Hassani has...

Johnson Olumide - January 2, 2020 0
Artists Throw Heavy Shades At Don Jazzy Along Side Other Popular Celebrities (Konged Cypher) Nigerian Producer & 3 Artists Go All Out To Break Some...