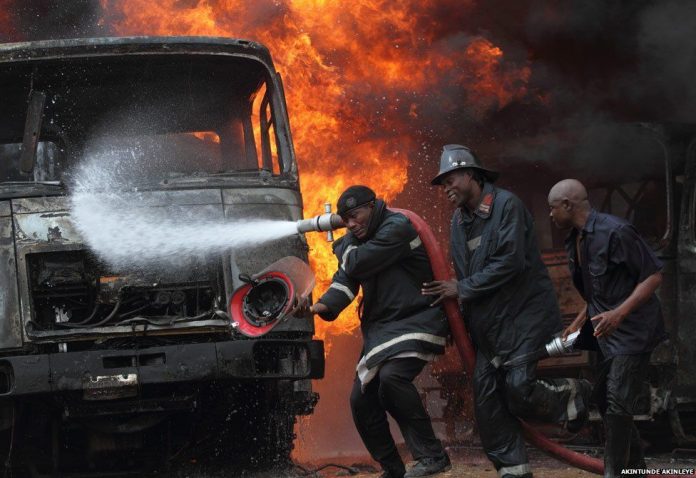 Its been a busy day at the office for both the Nigerian Senate and House of Representatives.

Earlier today the Senate rejected President Buhari’s Lauretta Onoiche for the Position of INEC Commissioner. (See why she was rejected).

Meanwhile, moments ago, The House of Representatives has opposed the plan to allow men of the fire service to carry arms, asking that security agencies should deploy operatives to accompany firefighters when on duty.

The opposition followed the unanimous adoption of a motion at the plenary on Tuesday, titled ‘Call to Discourage Arming of Personnel of the Federal Fire Service.’

Moving the motion, Thomas Ereyitomi, called the attention of the House to an announcement by the Federal Government to present before the National Assembly, a bill to repeal the Fire Service Act and grant firefighters the power to bear arms to protect firemen from mob attacks while carrying out their duties and responding to emergencies.

Ereyitomi noted that the announcement had caused anxiety to the public due to reckless use of firearms by those who have been licensed to use the same by their position as security agents, resulting in death or grave injuries to citizens.

The lawmaker stated that the Federal Fire Service is a civil outfit and not a security agency and, therefore, “not logical to allow personnel of the outfit to bear firearms, as they do not require such arms to carry out their duties.”

He argued that some mob attacks on firefighters are usually due to frustration on the part of victims when firefighters arrive late and ill-prepared to avert emergencies.

“The House is worried that arming the Federal Fire Service would add to the growing concerns about the reckless use of arms by the Nigeria Police Force and other security agencies, as doing so would be unnecessary and insensitive to the current pensive state of the nation.”

Adopting the motion, the House urged the Executive arm of government to increase the budgetary allocation of the Federal Fire Service to ensure that adequate infrastructure is put in place for efficient service delivery by the Service.

The House also urged the Nigeria Police Force and the Nigerian Security and Civil Defense Corps to “assign officers to the Federal Fire Service to accompany firefighters on emergency duties,” while mandating its Committee on Interior to liaise with the Committee on Appropriations to ensure adequate allocation to the Service in the 2022 budget and ensure proper oversight.

The Federal Government had said it would create an arm bearing unit to be known as ‘Fire Police’ to provide an armed outer cordon during operations, as part of the efforts to address the challenge often faced by firefighters during operations, through mob action and vandalism of firefighting assets in the country.

The Director of Press, Ministry of Interior, Mrs Blessing Lere-Adams, had in a statement issued on July 4, 2021, quoted the Minister of Interior and Chairman of Council, Rauf Aregbesola, as disclosing this during the opening ceremony of the National Council on Fire in Jos.

Aregbesola, who was represented by the Permanent Secretary, Dr Shuaib Belgore, had said the ministry would initiate the process of repealing the 1963 obsolete Fire Service Act and enact a new contemporary, vibrant and enforceable law, through the instrument of an Executive Bill.

The bill, he said, would be forwarded to the National Assembly for deliberation and eventual passage into law.

Adedokun Moses - August 26, 2020 0
Nollywood actress, Pat Ugwu have got fans talking on social media as she flaunts her massive behinds on Instagram live video while rocking a...

Johnson Olumide - March 29, 2021 0
Seyi Shay was last night dragged on the microblogging social media platform, Twitter, moments after she told a 17 years old boy he will...

Adedokun Moses - October 19, 2021 0
Nollywood actress and filmmaker, Tonto Dikeh has reportedly instigated the arrest of her former boyfriend, Prince Kpokpogri, who is currently the talk of the...

Johnson Olumide - April 3, 2018 0
Nollywood actress Damilola Adegbite is sure ripping the benefits of staying fit. The mum of one took to IG to share a beautiful photo of...

Nigerian Dancer Kaffy recounts a near-death experience after taking drugs she was allergic to...

Johnson Olumide - September 21, 2021 0
Popular Nigerian dancer Kaffy recounts a near-death experience after taking drugs she was allergic to. According to her, it was the Mercy of God that...