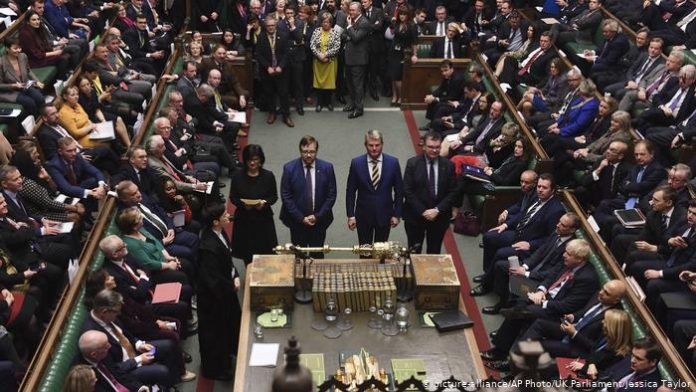 It’s been more than a week since the Re-arrest of IPOB leader, Nnamdi Kanu, so many Nigerians, and Political activists have all been reacting to the news.

Among the latest set of Political war hammers that would be looking into the matter is the United Kingdom Parliament, set to commence a debate on the “abduction” and repatriation of the leader of Indigenous People of Biafra (IPOB), Nnamdi Kanu, from Kenya to Nigeria, Peoples Gazette reports.

The British government had said that Kanu, who was traveling with a British passport, was not arrested within its shores as controversies trailed the circumstances and where the separatist leader was repatriated from.

IPOB had accused the Muhammadu Buhari-led government of abducting its leader in an East African country, a claim confirmed by Kanu’s attorney, Ifeanyi Ejiofor, who accused Kenya’s special police force of arresting, detaining, and torturing him before he was later handed over to the Nigerian government. (WATCH THE VIDEO HERE).

Meanwhile, Kenya High Commissioner to Nigeria, Wilfred Machage, had refuted claims that his country was involved in Kanu’s arrest, stating that it was not involved in the process.

Machage described the claims as “deliberately concocted to fuel antagonistic feelings in the minds of certain sections of the Nigerian people against the people of Kenya.”

But the UK Parliament, in a parliamentary schedule seen by Peoples Gazette will set aside a debate on Wednesday, July 7, to discuss the British government’s assessment of Kenya’s role in Kanu’s arrest.

According to the document, Lord Alton of Liverpool will be raising the issue at the House of Lords and will query the government on the separatist leader’s transfer to Nigeria.

“Lord Alton of Liverpool to ask Her Majesty’s Government what assessment they have made of (1) the alleged role of the government of Kenya in the detention and alleged mistreatment of Nigerian activist Nnamdi Kanu, (2) the circumstances surrounding the transfer of Mr Kanu to Nigeria against his will, and (3) of any assistance being provided to him by the High Commission in Abuja. HL1665,” the document read.

“With regard to any questions about whether the British High Commission is providing assistance in this case, we can confirm that the Foreign, Commonwealth and Development Office stands ready to provide ‘consular’ assistance,” Hurlock had said.

Kanu, also a British national was re-arrested by the Nigerian government last week and faces 11 counts of treason, treasonable felony, terrorism and illegal possession of firearms, among others.