Home Tech News Twitter: We will not rest until we regulate social media, says Lai... 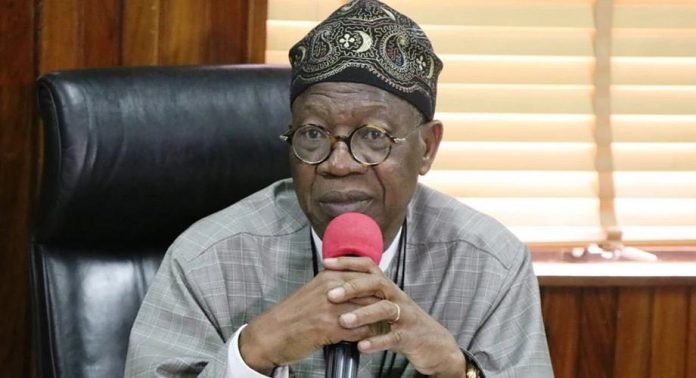 Nigeria’s information minister Lai Mohammed says the regime of President Muhammadu Buhari will continue to push for regulation of social media until it achieves it.

The minister said this in spite of the ongoing engagement with Twitter.

Mr Mohammed, who is in Washington to lobby foreign media on behalf of the regime he serves, was reacting to a report that he “sneaked out of Nigeria to meet with Twitter executives’’ in the U.S.

“When you talk about fake news and its danger, we need to take it seriously and I am happy that the entire world has now seen what we saw more than two years ago.

“I can assure you that we will not rest until we regulate social media, otherwise, nobody will survive it,’’ Mr Mohammed assured.

The minister told state-owned newswire NAN on Wednesday that his visit to Washington has nothing to do with the microblogging and social networking platform.

He said he was in the U.S. to meet with international media organizations and think tanks on the achievements of President Muhammadu Buhari’s administration and efforts made so far in tackling insurgency, banditry, and all forms of criminality.

Mr. Mohammed said the online report was an example of the danger fake news and unregulated social media portend for the country.

Can a minister sneak out of Nigeria without people knowing?” Mr Mohammed queried. “How can you come and say I sneaked out of the country?’’

So far, the Nigerian minister has engaged with BBC Radio and TV, Bloomberg, and Polico in Washington DC.

“You and I have been here, have I met with any Twitter official­?” He asked NAN.

The minister reiterated the position that the federal government suspended Twitter operations in the country not because it deleted the tweet by the President as being propagated in some section of the media.

He said the operation of the microblogging medium was suspended because of its persistent use of its platform for activities that were capable of undermining Nigeria’s corporate existence.

He also underscored the need for the organization to register as a business entity in the country.

In other news, Nigerian Actor and PlayBoy Timini Egbuson break his silence after being dragged on social media by his ex-girlfriend, in his response he said, I dont condone having a relationship with under age (READ FULL GIST HERE).

Johnson Olumide - January 2, 2020 0
Davido's first baby mama, Sophia Momodu strikes a pose with sexy ladies in swimwear produced by her own brand, Belladoneluxe. The Mother of one has...

“No artist should be compared with Olamide” – Singer Samklef writes

Violette - February 16, 2020 0
Talented music producer and singer, Samuel Oguachuba popularly known as Samklef has declare that no artist should be compared to rapper Olamide. With the music...

Violette - January 17, 2021 0
Millionaire entrepreneur Ehi Ogbegbor has shown the whole country why she's being ranked among the most prominent personalities in the country as she enjoys...

I’ve found love and ready to give it a third chance – Ehi Ogbegbor...

Violette - January 27, 2021 0
Millionaire Nigerian entrepreneur Ehi Ogbegbor has opened up on her relationship life in a new interview as she noted that she has found true...

Violette - January 5, 2020 0
It's the first Sunday of the year 2020 and veteran actress Tonto Dikeh has celebrated the great day in an amazing fashion. The beautiful and...