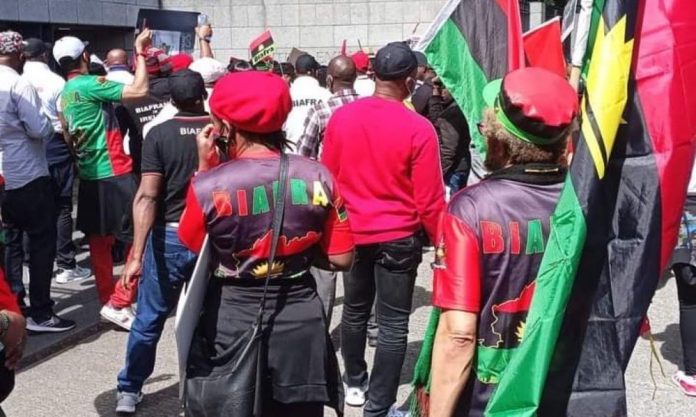 The Indigenous People of Biafra (IPOB) has threatened to “cut off the ears” of people still enforcing the Monday sit-at-home directive in the Southeast.

NewsWireNGR recalls the group had earlier announced the suspension of the sit-at-home order but people out of fear still comply.

Likewise, there are some suspected members of the proscribed group still enforcing the directive.

The group’s head of directorate, Chika Edoziem, had in the cancellation statement said; “There has been some discussion whether we must continue our ghost town in Biafra land. I wish to announce this very evening that as directed by the highest command of this movement, our Monday ghost town or sit-at-home in Biafra land stands suspended”.

Reacting to the recent developments, the spokesperson for the group, Emma Powerful in a statement quoted by DailyPost said; “…we cancelled the Monday sit-at-home.

“We said it in the beginning, but we stopped it, we have told people to stop sitting at home on Mondays.

“Anyone doing anything to the http://armodexperiment.com/ order online contrary, forcing people to sit-at-home on Mondays, or doing anything to them because they are not sitting at home on Mondays, if IPOB gets such people, no matter who the person is, we will cut off his ears, IPOB is not clan meeting, it is a http://www.buyxanax.org/ revolutionary movement fighting for the Republic of Biafra”.

On the entertainment scene, BBNaija season 6 housemate, Whitemoney is currently Bragging that he is one step ahead of everybody in the biggie house (Watch the video here).