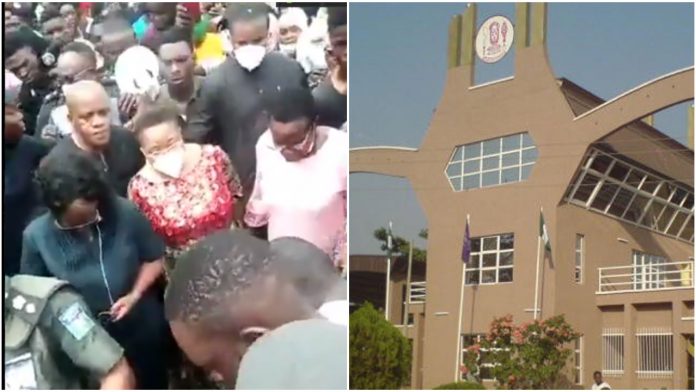 The Students of the famous University of Benin (UNIBEN) in a now-viral video could be seen forcing their VC who happens to be a woman to trek to the School gate before Addressing them over their protest.

Recall earlier today it was reported that Students have been asked to vacate hostels and the university premises not later than 12 noon on Wednesday, September 15, 2021.⁣
⁣
Authorities of the University of Benin (Uniben) have closed the institution with immediate effect.⁣
⁣⁣
On Tuesday, September 14, students of the university emptied into streets to protest the imposition of a N20,000 late registration fee by the institution.⁣
⁣
The students also mounted road blocks at the entrance of the university’s main campus in Ugbowo, a course of action that affected free flow of traffic in and around the Benin metropolis.⁣
⁣
A terse statement from the university reads as follows:⁣
⁣
“The Vice-Chancellor has reviewed the agitation by a section of the students’ body.⁣
⁣
“After due consultation, and in the overall interest of the general students’ body, the vice chancellor has, on behalf of the http://www.canadianpharmacy365.net/ antibiotics senate, approved the closure of the university with immediate effect.⁣
⁣
“This is based on security reports to avoid the students’ action being hijacked by hoodlums; and thereby prevent any form of breakdown of law and order within and outside the campuses of the university.⁣
⁣
“Accordingly, all students are to vacate the hostels and the university premises not later then 12 noon on Wednesday 15th, September 2021.”⁣
⁣
Benjamin Egwu, President of the Student Union Government (SUG), had said that the decision to charge students N20,000 for late registration was in bad faith.⁣

In other news, BBNaija season 6 female housemate, Queen has revealed to Whitemoney that she knacks 2 – 3 times a week and cant be with a man who cant satisfy in bed (watch video here).