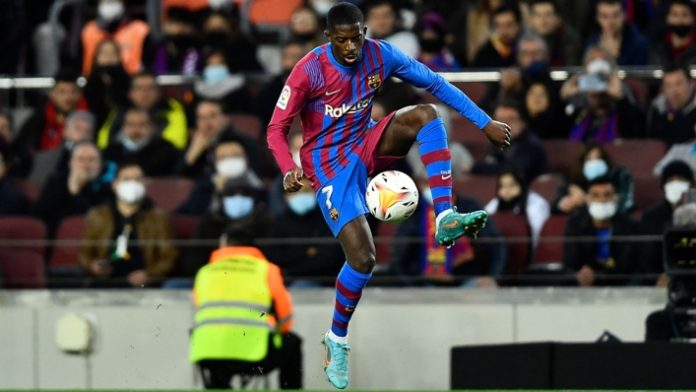 Ousmane Dembele netted his first LaLiga goal of the season and added two assists in a dazzling cameo as Barcelona FC moved back into LaLiga’s top four with a 4-0 win over Athletic Bilbao.

Dembele has become an unpopular figure with Barca fans after failing to agree on an extension to his contract, which expires at the end of the season, but his thunderous effort six minutes after arriving from the bench made sure of a Camp Nou victory on Sunday.

After Atletico Madrid had leapfrogged the Blaugrana with their win on Saturday, Pierre-Emerick Aubameyang continued his fine recent scoring form to set Xavi’s side on their way, before Dembele struck and then twice crossed for Luuk de Jong and the fit-again Memphis Depay in the closing stages.

And with Real Betis beaten by rivals Sevilla, Barca are now just a point behind third place with a game in hand as their season maintains its upwards trajectory.

Gerard Pique saw a header cleared on the line by Oier Zarraga while Ferran Torres tested Unai Simon with a stinging volley as Barca dominated the opening exchanges.

The reward for Xavi’s hosts arrived on 37 minutes when Aubameyang acrobatically finished after Pique headed against the crossbar from Dani Alves’ corner.

Torres should have doubled his side’s advantage past the hour mark, but his tame effort was pushed away by the onrushing Simon, who then denied Aubameyang’s weak header.

Simon was powerless to stop Dembele, though, as substitute Frenkie de Jong found the winger, who smashed a left-footed attempt in from the left side of the box, earning a touch off the post as he put the game beyond doubt.

There was still time for Luuk de Jong to flick a header into the bottom-left corner following Dembele’s pinpoint delivery from the right, before the France international repeated the trick to find Depay, who turned in from close range for the final goal.

What does it mean? Barca now targeting top three

LaLiga leaders Real Madrid have long since disappeared into the distance, 15 points ahead of Barcelona.

But victory over Athletic – who have not won at Camp Nou in 20 top-flight visits since 2001 – leaves the Blaugrana just a point shy of Betis with a game in hand as they look to secure Champions League football next term.

However, Atletico’s win against Celta Vigo on Saturday means they are level with Barca, who have lost just one of 15 league matches after a poor start to the season.

The ongoing saga concerning Dembele’s future wore on throughout January, with the Barca faithful even whistling the 24-year-old of late to show their disappointment with his failure to commit.

But the former Borussia Dortmund winger silenced his critics on Sunday with an efficient creative display. He was only on the pitch 23 minutes but managed to carve out a game-high three chances, including his two assists, on top of a magnificent goal.

Athletic made seven changes to their previous starting line-up – their most from one league match to another this season, presumably with an eye on their Copa del Rey semi-final first leg at Valencia on Wednesday – and sat back for large periods of the first half.

Marcelino could therefore have few complaints about the loss as he remains without a win against Barca in 20 top-flight attempts (D7 L13) – the only opponent he has not defeated out of the 38 he has faced in LaLiga.

Barca travel to Elche next Sunday, while Athletic host Levante the following day after that key Copa clash with Valencia.