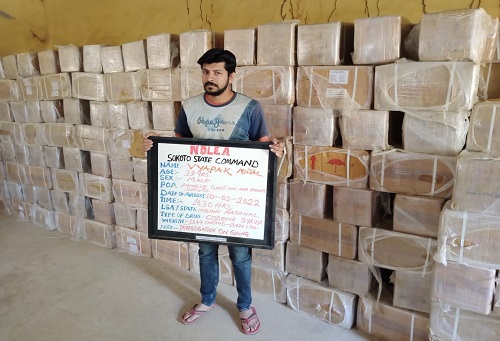 An Indian businessman, Vyapak Nutal has been taken into custody for interrogation by operatives of the

NDLEA’s spokesperson, Femi Babafemi, in a statement on Sunday, February 13, said the illicit drugs were smuggled through the land border between Nigeria and the Niger Republic in Sokoto State.

According to him, “The suspect had loaded the consignment into trucks in Cotonou, Benin Republic and drove through the land borders via the Niger Republic before entering Sokoto state at the Illela border.

Settled in a hotel in Sokoto state, credible intelligence reveals that Nutal began to look for buyers for the controlled drug. While operatives were on his trail, officers of the Department of State Security were able to apprehend him and swiftly handed him over to NDLEA on Wednesday, February 10, 2022.”