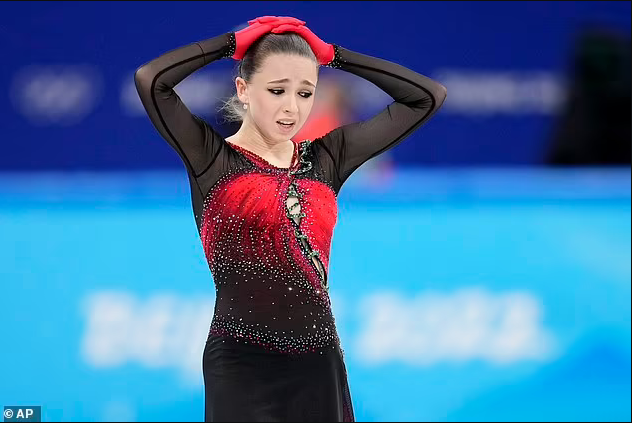 Kamila Valieva, the 15-year-old Russian skater at the heart of a doping scandal at the Winter Olympics had three different substances in her system at the time she failed a drugs test last December, a bombshell report has claimed.

In addition to testing positive for the banned angina drug trimetazidine, the New York Times report said the Stockholm laboratory that analysed Kamila Valieva’s sample also found evidence of two other heart medications that are not on the banned list: hypoxen and L-Carnitine.

The New York Times cited documents filed in Valieva’s recent arbitration hearing and confirmed by someone who took part in the hearing.

‘It’s a trifecta of substances – two of which are allowed, and one that is not allowed,’ United States Anti-Doping Agency Chief Executive Officer Travis Tygart said in the report.

Tygart added that the benefits of such a combination ‘seem to be aimed at increasing endurance, reducing fatigue and promoting greater efficiency in using oxygen.’

Valieva is reported to have listed the two other drugs on her doping control form.

Valieva was cleared on Monday by the Court of Arbitration for Sport to continue competing at the Winter Olympics in Beijing, a decision that sparked outrage.

The teenager tested positive at her national championships on December 25 but the result was not revealed until February 8, after she had already competed at the Beijing Games in the team event.

The CAS panel, who highlighted that delay as one reason in the verdict, said that a suspension could cause the teenage ice skater ‘irreparable harm’ in the long run.

They said: ‘The panel was concerned that if – after the completion of all procedures – she would not be sanctioned or would have a very low sanction, the provisional suspensions would have caused serious damage.’

Valieva shrugged off her Olympic doping scandal to dominate the women’s competition on Tuesday with an emotional performance that put her ahead in the hunt for a gold medal that is unlikely to be awarded at this Games.

Earlier on Tuesday, an International Olympic Committee official said Valieva has argued that her positive drug test was caused by a mix-up with her grandfather’s heart medication.

According to the NYT report, Valieva’s grandfather submitted a video testimony for the hearing in which it is claimed that he explained he used trimetazidine periodically when he suffered ‘attacks’. He also showed a packet of the medication to the video camera as part of his testimony.