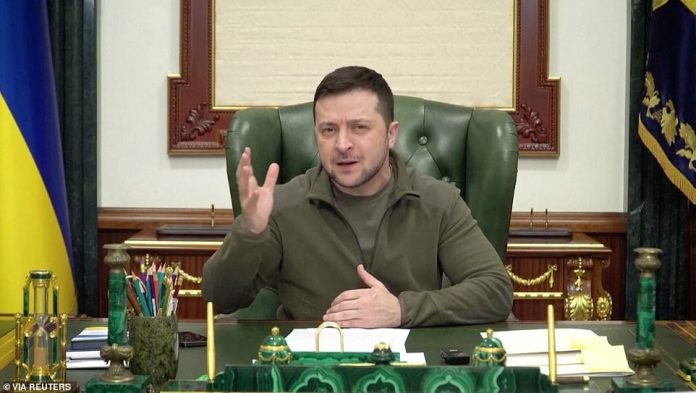 Volodymyr Zelensky, the president of Ukraine, has publicly returned to the presidential palace in Kyiv the first time he has revealed his location since the invasion by Russia.

Since February 24, the location of Zelensky has been a tightly kept secret and he has revealed he is the number one assassination target of the Russian regime.

Speaking to ABC News on Monday night, March 7, Zelensky, 44, warned the West that Vladimir Putin’s invasion of Ukraine was just the beginning, saying he wasn’t afraid hence he returned to the presidential palace.

He warned the West that Vladimir Putin will not stop once he has conquered Ukraine, telling a U.S. television channel: ‘We will come first. You will come second. Because the more this beast will eat, he wants more, more, and more.’

‘The more this beast will eats, he wants more, more, and more’

Zelensky, described Ukraine as a ‘zone of freedom’ that needed to be preserved.

‘And when the limits of rights and freedoms are being violated and stepped on, then you have to protect us,’ he said.

He added: ‘Today, war is here. Tomorrow, it will be in Lithuania, then in Poland, then in Germany.

‘This is serious.’United States is far away, but in recent days, I do feel that United States are closer to us.’

The former actor, gave his Facebook audience a tour of the palace, joking: ‘We used to say Monday, Monday is a hard day.

‘But it is war in our country, so every day is a hard day.’

‘We are all in our places working, where we should be. My team is in Kyiv with me.

‘We are all fighting, we are all contributing to our victory which will surely happen.’ 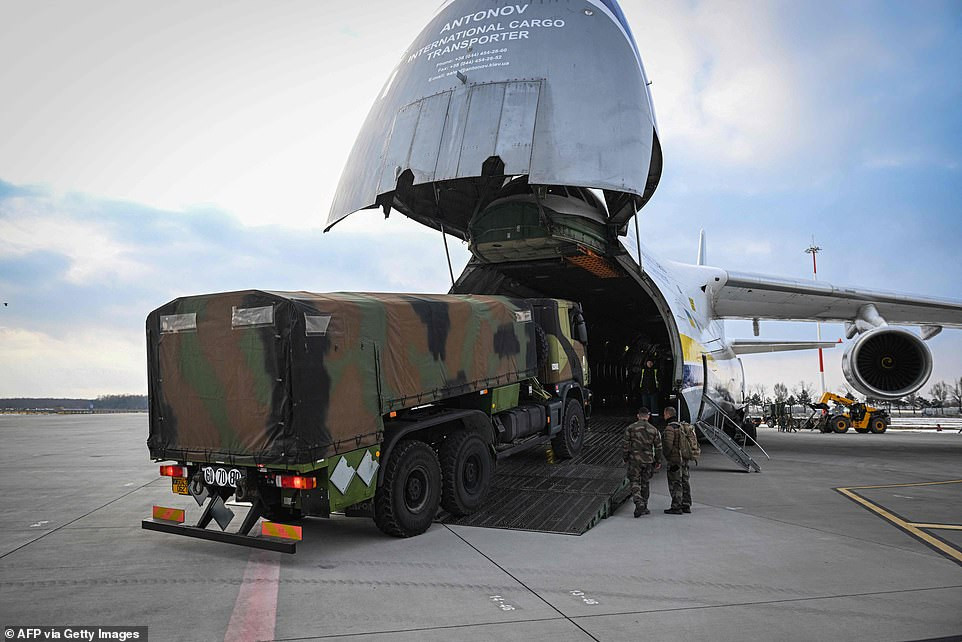 Also, in an interview from the palace with ABC News, Zelensky once again appealed to the United States to enforce a no-fly zone.

‘I told him (Joe Biden) that for us, the most important thing today is the security in the sky,’ Zelensky said.

‘If the missile is flying – yesterday, for example, the missile hit the university in the city of Kharkiv, and the dormitory.

‘And the same missile hit the tumor, pediatric clinic in Kyiv, so, if this missile is flying, so, are you thinking whether to shoot it down or not?

‘I think there is no any other answer, but to – yes, yes, they need to be shot down.

‘You have to preserve lives.’

He added that he was confident U.S. forces were up to the challenge.

‘I’m sure that the brave American soldiers who would be shooting it down knowing that it is flying towards the students, I’m sure that they had no doubt in doing so,’ Zelensky said.

The U.S. and its NATO allies have so far sent 17,000 anti-tank missiles to Ukraine, as part of a $350 million aid package agreed on February 26 – day two of the conflict.

Yet Zelensky said more could be done.

‘I’m sure that the president can do more. I’m sure he can,’ he said.

‘And I would like to believe that – that he’s capable of doing that.’

When asked if Putin himself was a war criminal, Zelensky said;

‘I think that all people who came to our land, all people who gave those orders, all soldiers who were shooting, they’re all war criminals,’ he replied.

‘I think he is capable of stopping the war that he started.

‘And even if he doesn’t think that he was the one who started, he should know one important thing, a thing that cannot deny, that stopping the war is what he’s capable of.’