In a wild Champions League match that resembled a basketball game at times, City beat Madrid 4-3 in the first leg of the semifinals but will leave Etihad Stadium wondering how the record 13-time champions were still in it.

Ultimately, Karim Benzema’s cheeky “Panenka” penalty in the 82nd minute saw Madrid escape with some hope of pulling off a comeback in next week’s second leg at Santiago Bernabeu.

City, looking to reach the final for a second straight year, was 2-0 ahead after 11 minutes — through goals by Kevin De Bruyne and Gabriel Jesus — and should have been further clear before Benzema steered in a volley off the post in the 33rd.

Phil Foden restored City’s two-goal lead in the 53rd, Vinicius Junior replied two minutes later for Madrid, and the chances kept coming for both teams before Bernardo Silva curled a shot inside the near post after the referee played the advantage following a foul on Oleksandr Zinchenko.

Benzema had the final say on the night by converting a penalty after Aymeric Laporte’s handball to become the competition’s top scorer on 14 goals and continue the best scoring form of his career, with 40 in all competitions this season.

Real Madrid coach Carlo Ancelotti lost 5-0 in his most recent visit to the Etihad — with Everton on the final day of last season’s Premier League — and City could easily have scored many more, powered by its spectacular start.

With Madrid fielding a ball-playing midfield — of Luka Modric, Toni Kroos and Federico Valverde — that lacked the bite of injured Casemiro, City cut through the visitors at will.

De Bruyne’s late run through the middle wasn’t picked up and he stooped to head in, via his left shoulder, an inswinging cross by Mahrez after barely 90 seconds. 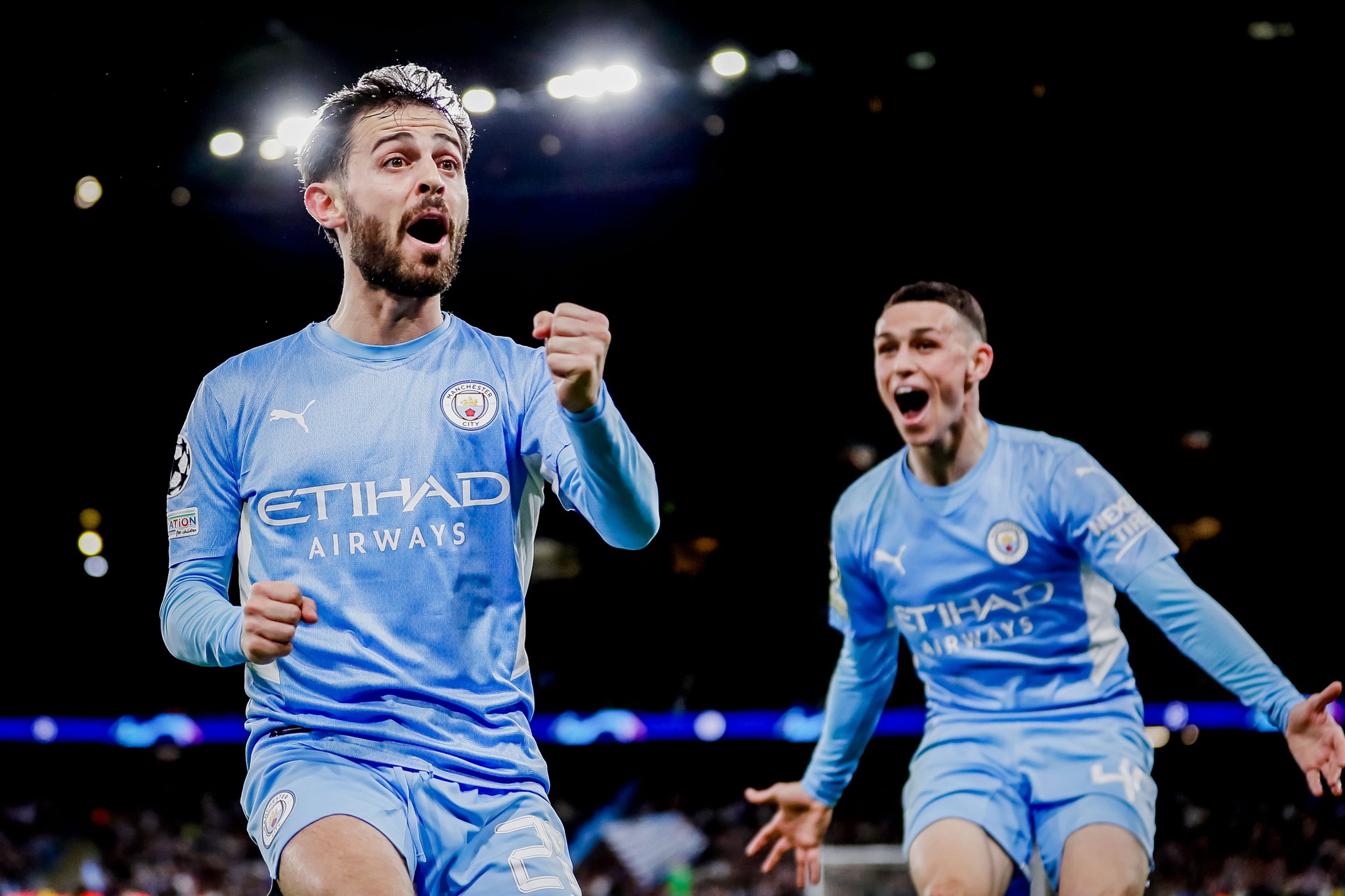 When Jesus turned David Alaba with ease following De Bruyne’s ball into the middle and slipped home a finish, the Etihad erupted again and Ancelotti flung his arms into the air.

Jesus, fresh off a four-goal haul against Watford on Saturday, was a constant threat — Alaba couldn’t handle him and was substituted at halftime — and Mahrez was being given so much space down the right.

The winger squandered two gilt-edged chances that left Guardiola enraged, the first in the 26th minute when he swing wildly when one-on-one with goalkeeper Thibaut Courtois and hit the sidenetting, and then just after the restart when he raced through again and curled against the post.

In between, Benzema had gotten his now-customary goal in the Champions League, clipping a volley in off the post from Ferland Mendy’s cross in the 33rd and City was living dangerously at times — especially goalkeeper Ederson when he dallied on the ball.

The second half was just as chaotic, and the goals kept coming.

City re-established its two-goal lead in the 53rd when Foden headed home a cross from Fernandinho, the 36-year-old club captain who came on at right back for the injured John Stones.

Back came Madrid, with Vinicius turning Fernandinho — showing his fallibility in an unfamiliar position — near the halfway line and sprinting down the left before cutting in and placing a shot beyond Ederson.

Bernardo’s goal owed as much to the quick-wittedness of referee Istvan Kovacs as the Portugal midfielder’s own brilliant finishing and it looked as if City was finally going to take a two-led lead to Madrid.

Then Laporte glanced the ball off his head and onto his flailing arm to give away a needless penalty. Benzema kept his composure while all around him were losing theirs, giving Madrid renewed belief of reaching a first final since 2018.