Home News It’s over, Soyinka and Sani have condemned Dariye, and Nyame has been... 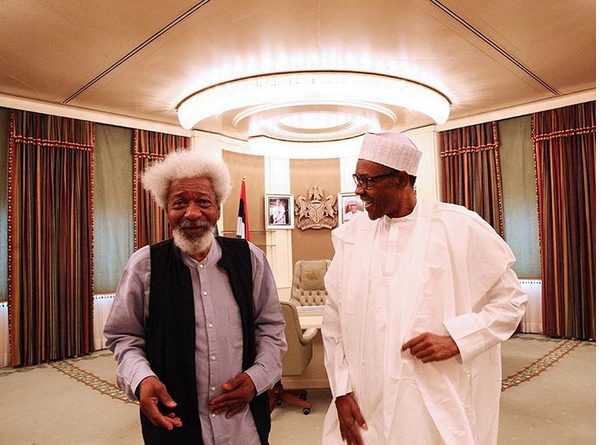 He stated that it was an action that the people would not quickly forget — or wipe away.

Soyinka made the remarks in a statement headlined “A putrid presidential Easter egg,” which he also addressed to Matthew Kukah, the Catholic Bishop of Sokoto Diocese, who recently criticized Buhari’s dictatorship in his Easter greeting.

Following the proposal of the Presidential Advisory Committee on the Prerogative of Mercy, the National Council of State recommended the pardon of Dariye, Nyame, and 157 other offenders last week.

Dariye was sentenced to 14 years in prison after being convicted of laundering N1.162 billion in public funds. The Court of Appeal in Abuja lowered his sentence to ten years, and the Supreme Court upheld his conviction.

Nyame was sentenced to 12 years in prison for stealing N1.6 billion, which was upheld by the Supreme Court.

Soyinka brought attention to the situation of two young men, Mubarak Bala and musician Yahaya Sharif, one of whom is serving a twenty-five-year sentence and the other is facing the death penalty for blasphemy.

He stated that they have not been granted forgiveness.

“Permit me to draw your attention to the following from your sermon: ‘Religious leaders… must face the truth that millions of people are fleeing Christianity and Islam here in Nigeria and around the world,” the essayist said. Our people become atheists while we are busy erecting barriers of divide with prejudice blocks. Still, we prefer to act as if we aren’t aware of the situation. We can’t pretend that we don’t hear our believers walking away from God and into atheism and secularism. No threats will be able to stop us, but conversation will be able to open our hearts.”

Soyinka expressed his belief that the president’s recent generosity had already won a few hearts and minds to the ranks of atheism, if not outright atheism, then at least a healthy skepticism of piety-spouting leadership that saw nothing wrong in attempting to put a young man’s life on the line for an honest declaration of conviction.

Veterans of broken commitments, on the other hand, were turned out to further infect a world they had betrayed, he continued.

“No pardon has been granted toward threatened, youthful integrity,” the Nobel Laureate said. It is, of course, simple to follow the progression of events. Following increasingly scathing remarks from his predecessor in office, Olusegun Obasanjo, who declared that the incumbent had run out of ideas and had nothing left to offer the nation, Muhammad Buhari decided to join the Easter train and give his subjects an Easter egg of truly presidential proportions.

“This is one egg squashed against Nigerian cheeks that they will not forget – or wipe off – in a hurry, coming from a leader who had put all his eggs in one basket, dubbed Anti-Corruption.” It invokes the mythology of Pandora’s Box, whose contents are said to contain all of the world’s ills. Putrid to the core, allied to power plays in a variety of forms, such as catapulting a notorious player in the martyrdom of a serving Minister of Justice to the center of the governance wheel, these are the types of bequests that have driven the country to this point of near collapse.

“Precedents are no consolation, no excuses. One states the obvious in remarking that precedents either undermine or reinforce principles, and aspiring offenders, especially in the political domain, are encouraged or inhibited by the ease or difficulty of access to the fount of mercy. Officeholders, we presume, are constrained by the existence of that dangling Sword of Damocles – simply knowing that one day, the cloak of immunity will turn threadbare, and the awaited day of reckoning finds them answerable. Clearly, not any longer.”

He added, “You will forgive, though disagree with me, I know, for clambering onto the Easter wagon myself, to echo the words of the One whose passage through the world the Easter season commemorates: “It is finished!”

Also, Senator Shehu Sani, who represented the Kaduna Central Senatorial District in the National Assembly Senate, says that the presidential pardon extended to Dariye and Nyame were politically-motivated.

Sani said it could be a ploy by the presidency to deploy the pardoned personalities to work for the ruling party in the 2023 general election.

“But meaning can only be read to it because we are now moving towards an election period, and their release might not be a selfless and innocent state action.

“It could be the reasons for the elections where they can be useful to the ruling party. Well, I don’t see anything wrong with it because the law says it can be done, and it is done.

“Like I have drawn your attention earlier, were they pardoned because they deserve or the law gave them pardon? I think that’s a different issue because we are heading towards an election. Those prominent political personalities are still forces to be reckon with in their states. It could be a gesture that ‘we have released you, and you too, should be on our side.’”

When asked if the pardon was politically-motivated, Sani said, “I think the political profile of the people convicted has simply helped them, and they were released to help the ruling party.”