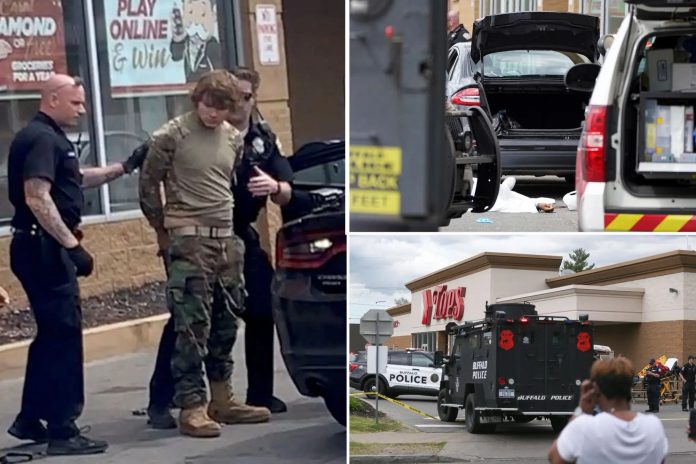 At least 10 people were killed and three others injured in what police are calling a “hate crime and racially motived” attack at a supermarket in Buffalo, New York.

It is reported that the 18-year-old white male dressed in tactical gear was taken into custody after the shooting, on Saturday, May 14. The supermarket is in a predominantly Black neighborhood a few miles (kilometers) north of downtown.

The incident began on early Saturday afternoon when officers were called for an active sh**ter at Tops Markets at 1275 Jefferson Avenue. Upon arrival, they found victims on the ground outside the supermarket and others inside the building itself. Police said 11 of the victims were Black and two are white.

In a video shared on Facebook, a man in military fatigues can be seen taken into custody. He appeared to have been armed with a semi-automatic rifle. The attack was live-streamed on Twitch and screenshots from the recording showed horrific scenes.

A 106-page online manifesto, believed to have been uploaded by the shooter, outlined his motive for Saturday’s attack. In the document, he describes himself as an 18-year-old man and self-described white supremacist and anti-semite.

“If there’s one thing I want you to get from these writings, it’s that White birth rates must change. Every day the White population becomes fewer in number,” the document says. “To maintain a population the people must achieve a birth rate that reaches replacement fertility levels, in the western world that is about 2.06 births per woman,” the manifesto read in part.