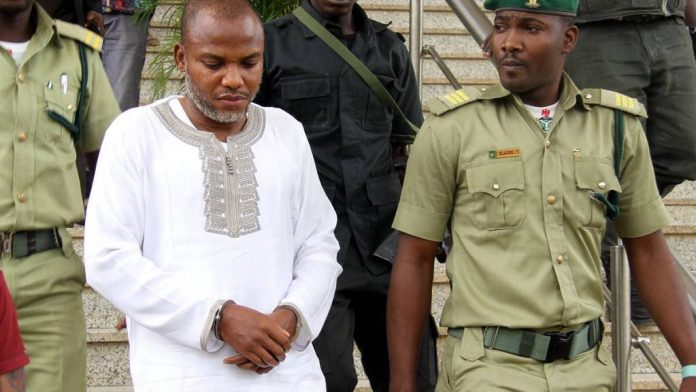 Nnamdi Kanu, the leader of the Indigenous People of Biafra (IPOB), was denied bail by Justice Binta Nyako of the Federal High Court.

Kanu’s lawyer, Mike Ozekhome (SAN), claimed during the latest adjourned hearing that a person should be permitted to roam free until he is tried and convicted, and that Kanu is innocent until proven guilty.

However, FG’s lawyer, M.S. Labaran, asked the court to reject the bail plea, claiming that Mr Kanu had allegedly broken the terms of his bail.

Ruling on the bail application, Justice Nyako said Mr Kanu has to explain to her why he did not abide by her earlier bail conditions in 2017.

She held that he was at liberty to file another bail application explaining why he was absent from the case since 2017.

“You have to explain to me why you did not abide by my bail conditions.

“This application is premature and also refused, the bail application can be refiled and reapplied.

“We have given 19 interlocutory applications since this matter, I wish this case can be speedily disposed,” Justice Nyako said.

“Rendition for the purpose of criminal investigation is allowed. In the instant case, there is a bench warrant on the defendant (Kanu). Suffice to say, he is a fugitive before the court,” she added.