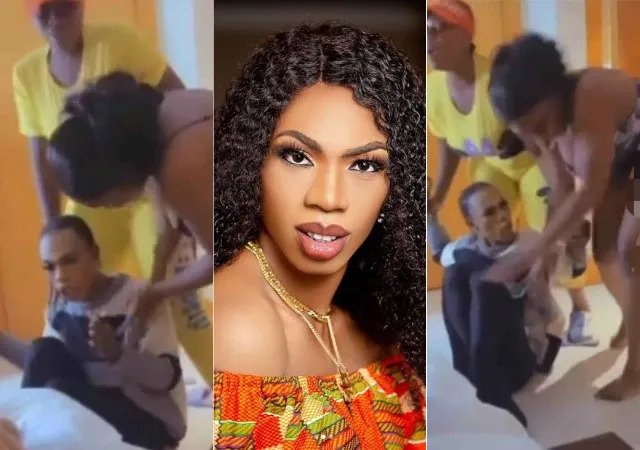 James Brown, a controversial crossdresser, was approached by a group of curious ladies who wanted to know his true gender.

The Instagram influencer was seen in a video doing the rounds on social media attempting to be undressed by several ladies who claimed they wanted to see if the crossdresser’s third leg would stand.

The self-proclaimed ‘Duchess of London’ began begging and threatening to sue the curious ladies, but they ignored him, desperate to fulfill their curiosity.

Away from that Disc jockey and billionaire heiress, Cuppy has proudly flaunted her DJing skills at Old Trafford

Describing Old Trafford as the Theatre of Dreams, Cuppy said her price has just gone up because of the privilege she had to DJ at the home of English premier league side, Manchester United, Old Trafford.

“As a @ManchesterUnited fan, I’m super proud to DJ at the Theatre of Dreams, the Old Trafford! My price just went up🔝💯 TBH, my dress is probably the most exciting thing that happened to us all season lol 🔴⚽️ #GGMU #ToCuppyThisTune”