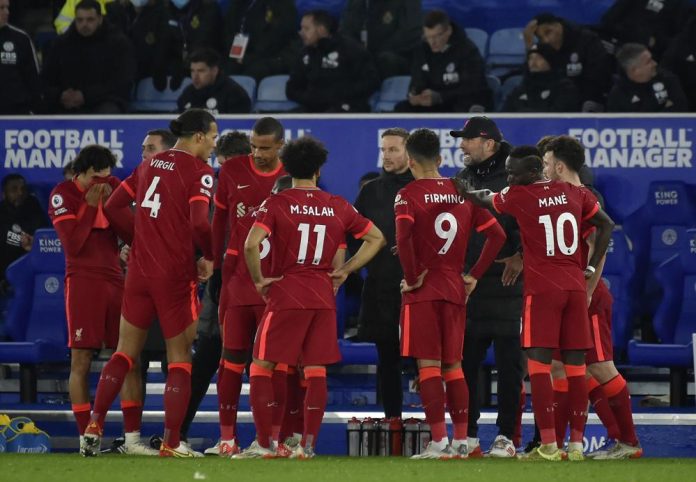 Liverpool avoided a rare Anfield defeat thanks to Luis Diaz, but a 1-1 draw with Tottenham on Saturday dealt serious damage to the Reds’ title hopes.

Early in the second half, Son Heung-min shook the famed old stadium by tucking in from close range to give Antonio Conte’s visitors a shock lead.

That was his 20th league goal of the season, and Liverpool knew a loss would put City in contention for the Premier League title.

Liverpool are chasing an unprecedented quadruple, and Diaz’s deflected equalizer in the 74th minute kept the dream alive just about, although hopes may be dimming. For the time being, they are top of the table, level on points with City, who have a game in hand against Newcastle United on Sunday.

Early attempts by Mohamed Salah and Harry Kane were blocked, and Virgil van Dijk nodded wide after getting on the end of a left-winging Andy Robertson corner.

Ryan Sessegnon’s errant defensive header came close to giving Salah a tap-in, but Hugo Lloris was alert to the threat.

From a Trent Alexander-Arnold corner, Van Dijk headed against the top of the Tottenham crossbar, before Luis Diaz pulled a stop from Lloris with a fizzing low drive. When Pierre-Emile Hojbjerg’s sliding drive touched the outside of the left post, it served as a reminder of the visitors’ threat.

Liverpool came out firing in the second half, swarming and searching for the huge chance that may lead to a breakthrough.

Son stunned them in the 56th minute, slotting past Alisson after Kane’s left-wing cross to Ryan Sessegnon was followed by a precise centre to the unmarked South Korean.

In search of a spark, Jurgen Klopp brought on Diogo Jota, and Salah had a golden chance when he cut inside on his left foot, only for Ben Davies to perform a magnificent block.

Diaz equalized when his 22-yard strike took a big deflection past Lloris and into the bottom-left corner, and Liverpool couldn’t produce a second despite their best efforts.