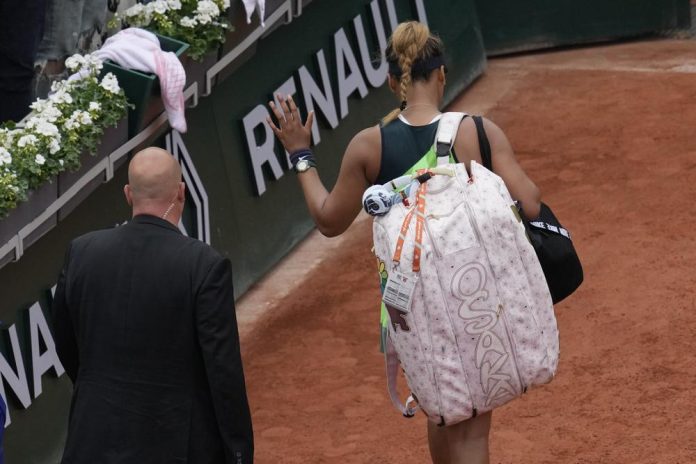 A year ago, Naomi Osaka left the French Open of her own volition, never beaten on the court but determining that she needed to pull out before the second round to stand up for herself and protect her mind.

On Monday, Osaka departed Roland Garros against her will — via a 7-5, 6-4 loss in the first round to 20-year-old American Amanda Anisimova, who is seeded 27th and also won their contest at the Australian Open in January — after taking a painkiller to try to deal with a troublesome left Achilles tendon. She tried to stretch the tendon by tugging on her neon yellow shoes at changeovers or by squatting to flex her lower leg between points.

Osaka was unable to summon the serving or court coverage on which her game is based, in part because her practice time and recent match play have been limited. The four-time Grand Slam champion and former No. 1-ranked player, who is now ranked No. 38 and was unseeded in Paris, double-faulted twice to end games and called the outcome “disappointing.”

Yet she also provided a measure of the way in which her mindset might have changed since her previous appearance at the clay-court major tournament, when she decided not to speak to the media at all (drawing a $15,000 fine and threat of further punishment, which prompted her withdrawal), saying that stance was because of anxiety and depression she hadn’t previously revealed. Her openness back then helped spark a wider awareness of, and conversation about, the importance of mental health.

“I’m really happy with myself,” Osaka said Monday, “because I know the emotions that I left France (with) last year.”

Barbora Krejcikova also was aware of the wide spectrum of emotions she went through herself at the French Open from 2021 — when she was a Grand Slam singles champion for the first time — to 2022 — when she joined Osaka in departing in the first round.

Krejcikova was seeded No. 2, but she was coming off an injured right elbow that kept her off the tour since February, and her first match back began with a 4-0 lead before unraveling into a 1-6, 6-2, 6-3 exit against Diane Parry, a 19-year-old from France who is ranked 97th and entered the day with a 1-5 career record in Grand Slam matches.

Krejcikova said she “hit the wall” early in the second set and never recovered, becoming just the third woman in French Open history to be defeated in her opening match a year after winning the title.

There weren’t any other such significant results on Day 2, when the women’s winners included No. 1 Iga Swiatek, the 2020 champion; and other past major champs Petra Kvitova, Victoria Azarenka and Bianca Andrescu. In men’s matches, 13-time champion Rafael Nadal won in three sets and No. 13 seed Taylor Fritz won in five.

Novak Djokovic opened his title defense Monday night with a 6-3, 6-1, 6-0 victory in less than two hours over Yoshihito Nishioka. He improved to 18-0 for his career in the first round at Roland Garros. U.S. Open champion Emma Raducanu also won in the night session, beating Czech qualifier Linda Noskova 6-7 (4), 7-5, 6-1.

Merely conducting news conferences, before the tournament on Friday and after this loss, were a step forward for Osaka. She was comfortable addressing all sorts of topics, including her difficulties on clay and grass courts, the fact that she is leaning toward skipping Wimbledon because there won’t be ranking points offered there and the increased attention to protecting athletes’ well-being — even if the strides made over the past 12 months are not necessarily enough.

“I mean, I feel like there is always more to do. You can’t progress and then just stop. You know what I’m saying? There always has to be evolution,” Osaka said. “But I feel like, as of right now, they are trying their best, and I think it’s really nice to see.”

While Osaka’s best performances have come on hard courts, Anisimova’s best showing at a Slam came on the red clay of Roland Garros, where she reached the 2019 semifinals at 17. And even if the occasional rain that delayed play for hours Monday made the tennis balls heavier and restricted what Anisimova felt she could do to deliver shots where she wanted them, she was good enough to advance in straight sets against a top-flight opponent.

“A lot of anticipation over the last couple of days. I was trying not to think about it too much, but going into the match, I did feel like the stress and the nerves a bit, because it is a very tough first round,” Anisimova said. “Just happy with how I was able to manage it and get through it.”