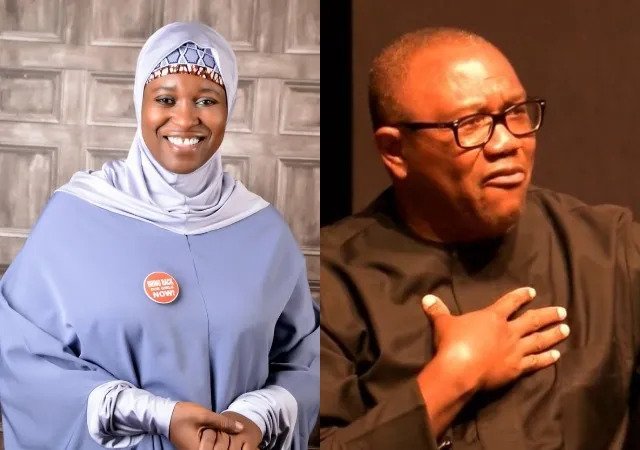 Aisha Yesufu, a human rights activist and co-convener of the ‘BringBackOurGirls’ movement, has given ten reasons why she cannot be the Labour Party’s presidential candidate Peter Obi‘s running partner.

Yesufu stated the reasons on Friday after some Twitter users urged her to run for president alongside Obi in 2023.

She wrote in a series of posts on her Twitter account, “I am from South-South, Peter Obi is South East (An all-Southern ticket is insensitive just like Muslim-Muslim ono), the Edo-born social activist, added.

“For many who still do not know. I am from Agbede (Kukuruku empire) in Etsako West Local Government Area of Edo State! My coconut head comes from ancestors!

“I am a very passionate person & unafraid to match toes on the issue of Justice, accountability and human rights & there are people who love me dearly and also others who hate me passionately. At this fragile time, Peter Obi cannot afford to antagonise any group! Perception is key!

“So my support for Peter Obi will do more good than me being his running mate.

“Those who love me will jump on board. Those who hate me will be able to overlook it as I am only a supporter!
(We have to think a million steps ahead)

“I love campaigns! I can sell someone but I will not be able to sell myself.

“I can say vote for him or her because he or she is a better candidate.
Even in business, I can’t market my goods

“I am not a process person & not too good with day-to-day management.
I am more of a strategist. I can gauge a situation & see an angle people are not looking at or focused on or I can to an extent see how a situation will play out.
I prefer working on where my strength is!

“I will not make a good party person for now because I can not keep quiet when a party does anyhow because it is my party. They will suspend me for anti-party activities.

I love the freedom of controlling my time! As a public servant, or elected official or an appointee, I will give up that freedom. I will now have to go to the office daily and on time. I cannot travel out when I want and stay as long as I want if I am a public servant.

“Also I will not be able to talk anyhow to people who come to my TL and do anyhow because they would be my bosses as per taxpayers! I love my mouth too much. You people know I don’t subscribe to the ideology of if they go low you go high!

Last but not least is that I will be forced to be politically correct. Not saying things that should be said but things that will make people feel good!
No way!

“I am a person at peace because my outside matches my inside always.
How I feel inside is what you see outside!”