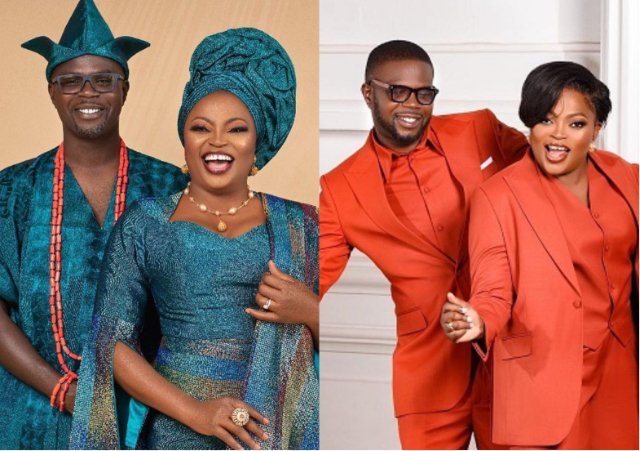 The dissolution of Funke Akindele and JJC Skillz’s marriage has been the topic of numerous ugly online publications.

Gist Lover, one of the most contentious bloggers, has revealed shocking information about their breakup.

JJC Skillz revealed that he and his wife have split up due to irreconcilable differences today, confirming the rumors that had been circulating about it.

Online rumors claimed that their dissolved marriage was caused by infidelity, egotism, and poor financial management.

Gist Lover, who had previously made the public aware of Funke Akindele’s broken marriage, took to Instagram to offer an update on the allegation that the All Progressives Congress APC sponsored JJC Skillz in order to harm Funke Akindele’s reputation by exploiting their failed relationship.

In the update, it was also claimed that Funke Akindele turned down the People’s Democratic Party’s offer to make her the deputy governor of Lagos state in favor of a different job.

Moving on, a conversation stating that PDP is prepared to protect Funke Akindele by sponsoring articles favorable to her reputation was started in response to Gist Lover’s accusations.

Read the full statement below.

Hello tueh tueh , JJC and Funke Akindele are playing politics , JJC announcement is politically backed up, Funke Akindele running for vice governor too is sponsored. Kindly read the analysis below, I may be wrong .

Y’all know PDP and APC don cast and the youths are ready to disgrace anybody supporting them right , so I guess PDP approached Funke to campaign for them due to the massive fans and followers/influence she has , Funke seeing how the youths are disgracing celebrities campaigning for all these old hags declined and told them that the youths will come for her, seeing that their offer campaign proposal didn’t work they decide to go further and offer her a post so it will look like she is not campaigning for them directly but also into politics , same thing trabaye abi Na Ibraye did with Our Tonto, so they make it seems like Shebi the youths wants a youth to run, here you have it oooo but lowkey Na all those old hags Dey in power, so they bring out a youth whom they know the Nigerian youths won’t be able to say NO to, they give the person a post where he or she won’t be able to work or do much, such as vice governor etc, and again PDP needed a strong opposition party for APC , because Tboy and him agbero boys sabi go to an extent to buy votes, so PDP choose Funke , We love Funke, YES, We love TONTO, Plenty Yes, but how I wish they didn’t come out under these two bas.tards Party, so as i Dey talk now, APC seeing that because of Funke PDP might have a chance ahead of them, I guess they reach out to Funke Husband to Announce the break up so it can soil Funke political chance of winning for PDP, because really the break up don happen since , even when I broke the news they kept doing damage control up and down , WHY NOW? The reason why I said this is because one blogger in my team reached out to me this morning that PDP wants me to defend Funke because they feel APC sponsored JJC, the blogger further said that they already paid her to defend Funke and they sent my own money too, I told the blogger right there , I don help you collect this kind money before , you know how many of these bas.tards ruining Nigeria I don turn down, she further said.